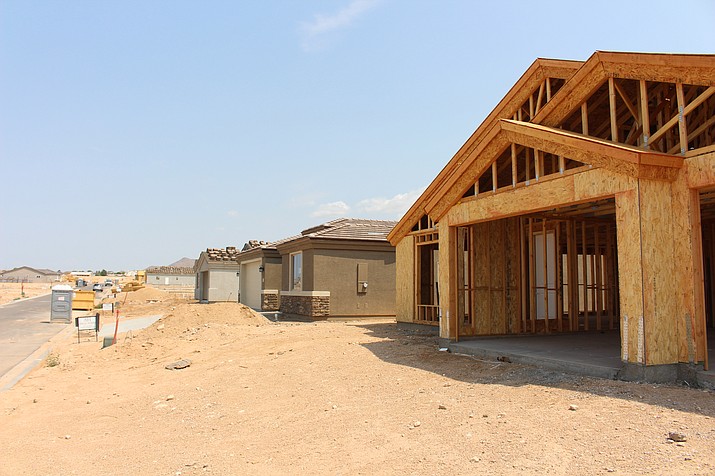 New homes are under construction by Angle Homes in the Hualapai Foothills and Hualapai Shadows subdivisions. While sales have slowed, home prices continue to increase in Kingman and elsewhere in the nation. (Photo by Hubble Ray Smith/Daily Miner)

KINGMAN – Home sales have slowed across the nation after a busy spring, and higher prices in certain markets are giving buyers cold feet as they fret about another housing bubble.

Doug Angle, founder of Angle Homes, said he’s seen a slowdown in sales over the last couple of months. He closed 91 new home sales in 2017 and expects to increase that number to about 110 this year.

“We’re still selling homes, but not as much as the spring,” Angle said. “You’ve got to keep an eye on it. It kind of makes you nervous. You don’t know if it’s peaked or not.”

Angle is actively building in eight housing subdivisions around Kingman with homes starting at $152,000 for a three-bedroom, two-bath home in Cerbat Vistas and ranging up to $575,000 for a four-bedroom, 3½-bath home on two acres at Copper Wind.

“Many of the buyers are from California, about half of them,” Angle said. “We hope things will keep growing in the next two years, but in the last 45 days, we are starting to see a slowdown in sales both locally and nationally.”

Homes are sitting on the market a little longer and buyers are negotiating a little harder for deals, he added. Some builders may give them a $5,000 discount, but then recent buyers get upset because they didn’t have the same opportunity, Angle mentioned.

Total home sales have also gone up to 964 through July, compared with 908 sales for the year-ago period.

“The biggest change in market activity is that last year we had much more inventory of homes for sale,” said Mike Wagner, Realtor with ReMax Prestige. “This year, the high demand continued, but our inventory was down by over 30 percent.”

Higher demand combined with fewer homes on the market leads to higher prices, which makes Kingman a “seller’s market,” he said.

Tariffs on Canadian softwood lumber are acting as a tax on U.S. home builders and buyers, making housing less affordable and forcing builders to look overseas to meet demand.

That’s why the National Association of Home Builders believe the Trump administration should resume talks with Canada to rescind lumber duties and negotiate a settlement to address builder concerns about price and availability of supply.

Reports have emerged about some cities in the nation, such as San Francisco where housing prices have far outpaced income growth, scaring a lot of buyers into holding off on entering the market.

“Not to worry,” Wagner said. “Kingman is not becoming the new California, although a substantial number of buyers are from that state. Buyers continue to be spread across the counter, from the East Coast to the South to the Midwest and West Coast.

“With the baby boomers in the beginning of retirement age, our largest demographic is people looking for affordable retirement with good year-round weather.”

Wagner is still licensed in California, so he advertises there to attract people who are fed up with the Golden State and its high cost of living, high crime rates and unbearable traffic. He feels Kingman could do more to lure those disgruntled Californians.

“People are finding us by accident or have some history with Kingman,” he said. “(They) got gas here, car broke down here. But if we had a couple of dedicated individuals who traveled around the country showing the benefits of living in Kingman, our growth would increase exponentially.”

Home builder Angle said sales are slowing in higher-priced markets such as Denver, Seattle, San Francisco and Los Angeles as buyers think twice about taking on a substantial mortgage.

“Prices have been going up the last three to four years. At some point, people say that’s too high, they’re not interested in buying,” Angle said. “It’s going to reach that point. You’re going to have a correction. They’re starting to see that in expensive markets.”

New homes are needed to replace older ones and accommodate the growing number of U.S. households, though recent production has fallen short of levels needed to meet those dynamics, according to the National Association of Home Builders.

One result is increasing pressure to make existing homes last longer. It’s no surprise that U.S. Census statistics show the number of homes built before 1970 disappearing at a very slow rate – about six out every 1,000 being demolished each year.

Housing construction permits down, but home sales steady in Kingman<BR>
Slowing market may not be all bad
Kingman housing market on the up-and-up
Housing market dicey, but moving forward
Housing up, but it's not another boom