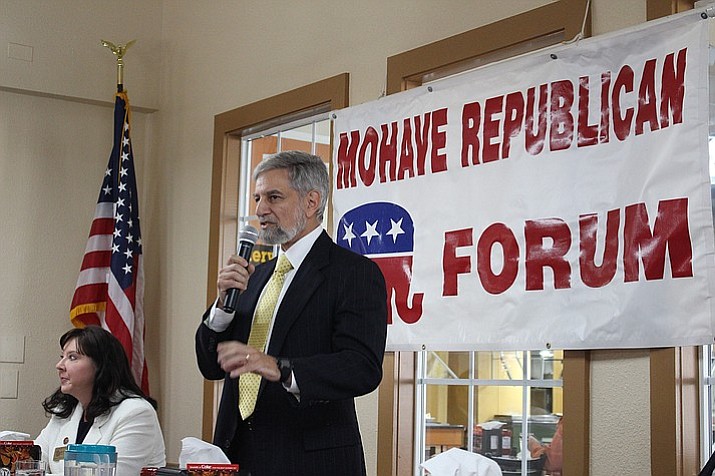 PHOENIX (AP) – Arizona Secretary of State Michele Reagan is facing a primary challenge from a Republican businessman who claims her tenure has been marked by missteps.

Steve Gaynor cites issues like a delayed mailing of voter pamphlets and the rollout of a campaign finance website that he calls a "waste of taxpayer money."

Reagan, a former state legislator finishing her first term, maintains that she's brought practical and long-needed improvements to the office, like the ability to accept credit cards. She says the "See the Money" website is still developing and work is in progress to include information like lobbyist disclosures.

"A lot of people get into elected office, and they don't change very much within the office," she said. "They don't advance the technology, they don't do it because that takes risks and it's scary. We look back, and all of these things were risks worth taking."

Gaynor, who owns a commercial printing plant in Los Angeles, points to his management experience as the reason voters should trust him over Reagan.

"I've done corporate turnarounds before and that's why I knew I could would walk into a troubled situation like this and clean it up," he said.

The secretary of state's office handles record keeping and business services in addition to responsibilities involving voter registration and candidate filing as part of the Election Services Division. The person also serves as acting governor when the sitting governor leaves the state.

The winner of the Aug. 28 primary will face state Sen. Minority Leader Katie Hobbs, a Democrat from Phoenix who is running unopposed in the primary.

Reagan says that she accepts responsibility for mistakes that have occurred under her tenure: like when 200,000 voter pamphlets were sent out late. She says new processes were put in place to ensure the pamphlets go out in a timely fashion. She says her office has also worked to move certain businesses processes online.

"This agency is a much better place than it was," she said. "We're immensely proud of that."

Reagan also took heat for hours-long voting lines that Maricopa County voters endured during an election in 2016, but she says the criticism was misplaced. She says the lines were the result of county decisions.

Campaign finance records show that Gaynor's ending cash balance in June of $645,000 was bolstered by $5,650 from seven individuals and $380,000 in loans that he made himself.

In the same time frame, Reagan raised more than $66,000 in donations from more than 100 individuals. She headed into the summer with about $370,000 cash on hand – and said she's suspect of why a wealthy businessman like Gaynor would put so much money into the race.

"What are his motives?" she said. "Voters are smart, they can see through that."

Gaynor says whether he's spending his money or from donors is something voters to decide.

"I think it's important that the office be run competently," he said.