Arizonans got 78.3 million robocalls in June, part of a nationwide boom 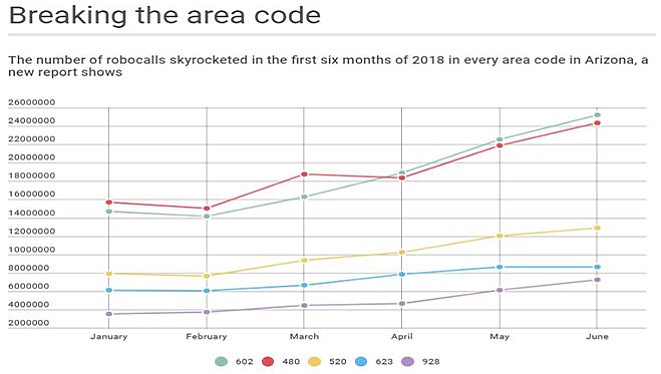 WASHINGTON – Robocalls skyrocketed for every area code in Arizona in the first half of this year, reaching 78.3 million calls in June alone, according to data compiled by a firm that sells call-blocking software.

The Arizona spike mirrored a national trend, with the total number of robocalls in the U.S. hitting 4.1 billion in the month of June, up from 2.9 billion for January, according to the data from YouMail. The increase came despite Federal Communications Commission regulations aimed at reining in such calls.

“It’s become a real problem and agencies at all levels of government are trying to deal with it,” said Susan Grant, director of consumer protection and privacy at the Consumer Federation of America.

In Arizona, the number of calls rose from just under 48.1 million in January. The 431.5 million calls to area codes in the state in the first six months of this year almost reached the total for all of 2017, when Arizonans received 475.4 million robocalls.

The increase can be attributed to the development of technology that allows one person to send out large amounts of calls, said Ed Mierzwinski, senior director of consumer programs at the Arizona Public Interest Research Group.

“Now it’s one guy with a computer, who could be working anywhere, making all the calls, not a bunch of people in a big room in a building with a giant phone system,” Mierzwinski said.

He said there are two levels of robocalls, the first being “unfair robocalling from student loan companies and debt collectors and banks” who are “generally harassing people.”

“They’re legitimate businesses but they might not have a legitimate reason to contact you,” Mierzwinski said. “They may be contacting you too much. Robocalls are making it too easy.”

The FCC notes on its website that not all robocalls are illegal – and Mierzwinski added that what could be illegal is simply the debt collectors surpassing the number of times they are allowed to contact borrowers.

But the next level of robocalls come from “bad guys” – people who, in Mierzwinski’s words, have “no reason to live, basically.” Those scammers use computer software to send out mass amounts of calls, usually from overseas.

The scammers can now use a trick called spoofing, when one phone number is masked as another. Spoofing itself is legal; a doctor or a public official can use it to display an office number, for example, when calling from a cellphone. But the FCC says that spoofing “with the intent to defraud, cause harm or wrongly obtain anything of value” is illegal and can lead to fines of up to $10,000.

The FCC website also states that rules require telemarketers – which are legitimate businesses – to provide an automated menu throughout the call for people to get off the calling list. But the FCC also warns not to engage in such menus from unknown or spoofed numbers.

“I’m glad that the Federal Communications Commission has succeeded in lighting a fire under the telephone companies to get them to work together to create ways to identify spoofed calls,” Grant said.

But Mierzwinski said that the FCC needs to do more and that “they’ve done a terrible job” managing the growing problem of robocalls. He urged consumers to call their telephone service providers and ask them to “improve the way that they are trying to block robocalls.”

“The robocalls keep coming,” Mierzwinski said. “They’re rapidly growing into being an epidemic of nuisance.”