AZMerit results are in: KAOL improves, KUSD says it still has ‘work to do’ 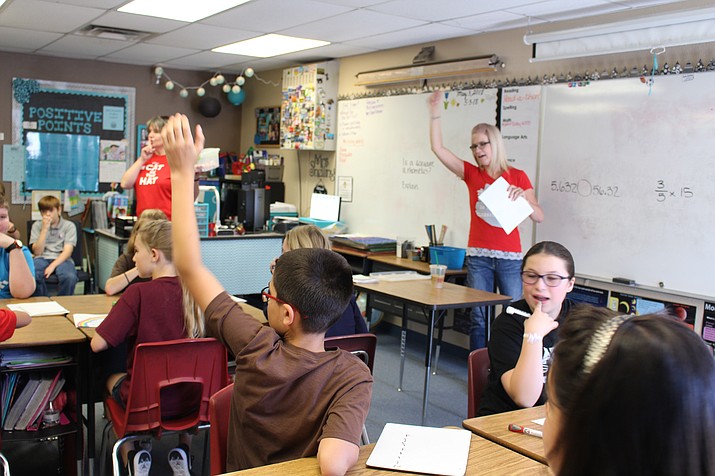 Kingman Academy of Learning has improved its reading and math AZMerit scores from the previous year at its intermediate and middle schools. The photo above was taken during its Read-a-thon earlier this year when the upperclassmen students participated in different reading activities. (Photo by Vanessa Espinoza/Daily Miner)

KINGMAN – Through the school year teachers prepare students for the next level in their lives, but also prepare them for the AzMerit test.

Scores have been released for both Kingman Unified School District and Kingman Academy of Learning schools.

“Intermediate and middle school did a great job of targeting areas that needed extra attention, finding supplemental material if needed to achieve the standard,” said Susan Chan, executive director at KAOL. “We see the result there.”

KAOL High School saw a decrease in its overall percentage passing scores in reading and math. In 2017, it scored 46 percent passing percentage for math, but only 34 percent passed for 2018. Chan said ninth-graders went up in English, 10th-graders went down, and 11th graders stayed the same.

Her personal goal is to have an 80 percent passing rate. She did add that KAOL averaged 52 in reading and 57 percent in math, which is above the state average.

This year around, WCMS and KHS increased reading scores by 9 percent and Manzanita by 6 percent.

Jeri Wolsey, assistant superintendent, said teacher retention this year is better than previous years and that could be a factor to increases in test results.

In reading, WCMS went up from the previous year to 41 percent from 33 percent, KHS increased from 14 percent to 19 percent, Lee Williams High School increased 29 to 34 percent, and Mt. Tipton from 19 to 23 percent.

“We want to be above state average,” Roger Jacks, KUSD superintendent said. “We have some work to do.”

Wolsey also said it’s hard to see student growth with not enough teachers in the classrooms, and she hopes to see improvements in the district scores next year.

Jacks also added that the district faces challenges. They appreciate the support of the parents and community, and that it’s a community effort to get where they need to be.

Editor's note: The story has been changed to reflect Kingman Academy of Learning averaged 52 percent in reading, not 62.