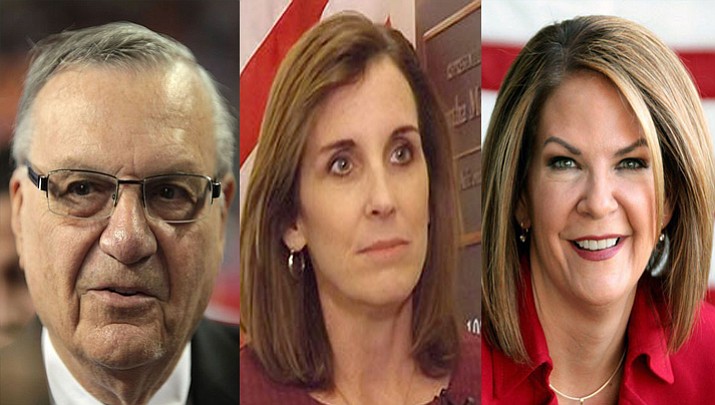 PHOENIX – A new statewide poll suggests that all the money being spent on behalf of Martha McSally on TV commercials to become the Republican nominee for the U.S. Senate has been paying off.

The survey done by OH Predictive Insights finds that 47 percent of those questioned say they support the congresswoman from Southern Arizona to be the GOP contender for the seat being vacated by Jeff Flake. That's up 12 points from when the same organization did its last poll a month ago.

Former state Sen. Kelli Ward is holding on to the same 27 percent she had a month ago. And former Maricopa County Sheriff Joe Arpaio has seen his own support actually slip slightly to just a hair more than 13 percent.

The poll was conducted Tuesday and Wednesday, the same week as DefendArizona spent more than $900,000 on commercials backing McSally.

That organization, which was formed specifically to help McSally, is financed by various conservative Republican interests, led by California billionaire William E. Oberndorf who put in $150,000. There also are $100,000 donations from Tucson car dealer Jim Click, Randy Kendrick, who is the wife of Arizona Diamondbacks owner Ken Kendrick, and Arkansas businessman Warren Stephens.

There also are $100,000 donations each from two Delaware limited liability companies, Blue Magnolia Investments and Highway 76. Those donations, however, have generated a complaint to the Federal Elections Commission by the Washington, D.C.-based Campaign Legal Center charging that both companies are shells set up solely to allow others to give to McSally while hiding their names.

McSally has also benefited from ads paid for by One Nation praising the work she and fellow Congressman David Schweikert have done to secure the border.

Campaign donations aside, pollster Mike Noble said much of McSally's newfound support is coming from the ranks of those who just a month ago said they had yet to make up their minds.

All that suggests, absent some major last-minute development in the race, McSally probably could coast to victory in the GOP primary.

Three things are working in her favor.

First, the number of undecided Republican voters as of Wednesday, when the two-day telephone survey was complete, is now down close to 12 percent. So even if all were to somehow swing to Ward, she still wouldn't have enough to overcome to overtake McSally.

Second is the fact this is a three-way race, meaning the winner simply needs a plurality of votes cast, not an actual majority.

Finally, Noble said it turns out that nearly 38 percent of those asked reported they already have mailed back their early ballots, leaving a smaller pool of people for any last-ditch efforts by one candidate to try to attract from those now favoring another.

The automated telephone survey of 578 respondents, done in partnership with ABC-15 Phoenix, included 89.3 percent Republicans, all of whom voted in two out of the last three elections, and 10.7 percent independents who also fell into the same category and, as allowed by law, decided to vote in the GOP primary. It has a margin of error of 4.1 percent.

Automated telephone polls cannot legally contact people who only have cellphones. But Noble said he doubts the absence of those in the survey had a significant effect given the demographics of likely Republican voters.

While the poll did not look at the Republican race for governor, one question asked would seem to provide good news for incumbent Doug Ducey looking to be the party nominee in his bid for a second term: More than 58 percent of the respondents said they believe Arizona is on the “right track,” versus about 25 percent who believe the reverse, with the balance saying they do not know.