An Ultimate Ambassador: Karista Rose Harris inspires and empowers with her past and future 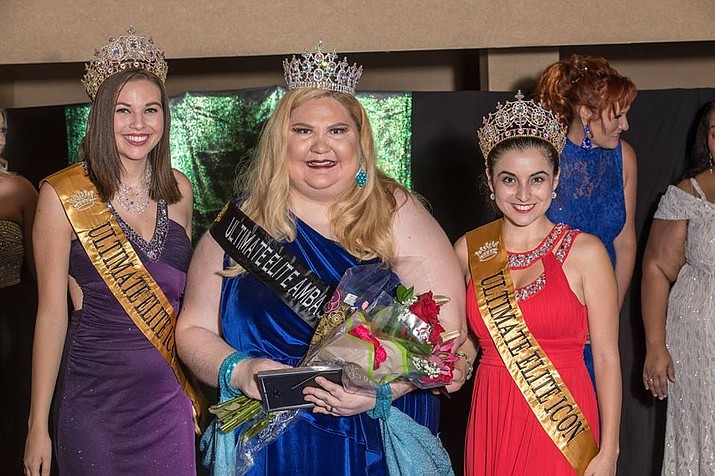 KINGMAN - Advocating for those who don’t have a voice is a special calling for some people, especially if they have an impactful story they can share with others. Opportunities to do so usually come by working with an organization. 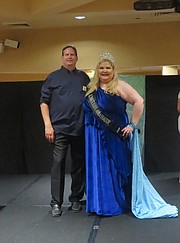 Karista with her husband James Harris during her crowning of Ultimate Elite International Ambassador. (Courtesy)

Karista Rose Harris, born in Kingman, is now the Ultimate Elite International Ambassador. The title is awarded to a queen (pageant) who has done the most during their reign, such as community service, making appearances, and demonstrating entrepreneurship.

Gaining this new role, Harris finds it rewarding by having a sense of accomplishment and opening new doors.

“It allows me to access (doors) that normally would have been more difficult,” she said.

Longtime residents might recall Karista, the little girl with long hair and a bright smile, who as a child in the 1990s dressed like a pioneer child from the 1800s.

Her last name was Hawk back then - Karista Rose Charity Hawk. She used to pull a wagon up and down the streets of Kingman, handing out religious literature to anyone kind enough to accept her offering.

Experiencing a rough childhood of abuse by her mother, being part of the foster care system, experiencing self-harm, and being in a domestic violence relationship, she has overcome her past to show people her better-future-self.

Harris’ platform as ambassador is “Defying the Odds,” which she certainly has. Last year alone she was in a rare myxedema coma and in an adrenal crisis after having coded from zero thyroid hormones in her blood stream.

“Look at me. I shouldn’t have survived,” Harris said. “I physically made it to compete toward the title of Mrs. International Ultimate Elite. That in itself was a miracle.”

Although she has overcome so much in her life and continues to share her story, she has received remarks from people who have told her to stop telling others about her journey.

“Yes, it happened. Yes, it’s over but at the same time I’m not the only one who has experienced childhood trauma,” Harris said. “Being quiet does not save lives. Being quiet gives control to the abuser and supporters.”

Her past brings forth experience that inspires her to publicly speak and be a mentor. The courage and strength she has gained over the years puts her in a position to “empathize” with those who have been in similar situations.

Harris is a member of the National Coalition Against Domestic Violence Speakers Bureau and a spokesperson for Adrenal Insufficiency United. She works with Young Ones United, an organization that raises awareness on child abuse prevention and education, and provides volunteer support through other organizations.

She is co-authoring a book with other women called “Sheros, Vol. 2,” which talks about difficult circumstances and advice on how to rise above them. As ambassador, she hopes to continue representing the women of Arizona on an international level.

When asked if she would come to her hometown of Kingman to speak to schools about her journey and spreading awareness she said she would love to visit.

For more information on Karista and her journey, visit her website karistarose.com.