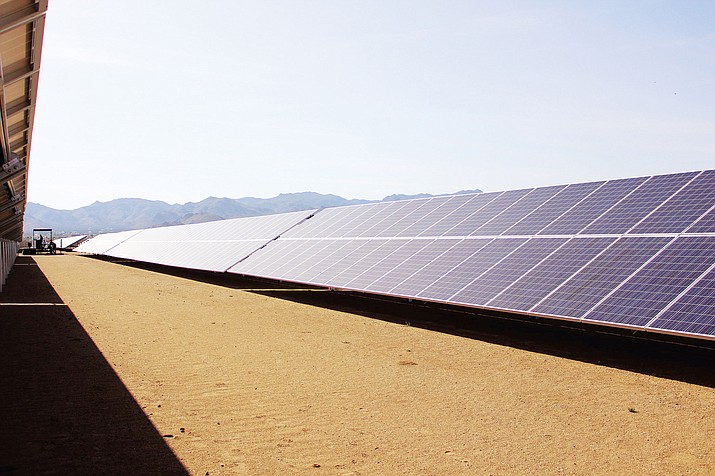 The Clean Energy for Healthy Arizona Act is left with about 329,000 valid signatures, far more than the 225,962 needed for constitutional amendments like this. (Daily Miner file photo)

PHOENIX – The state’s largest electric company hopes to block a public vote on a renewable energy initiative by charging that initiative organizers purposely – and knowingly – submitted signatures they knew were invalid.

Attorney Brett Johnson, representing Arizonans for Affordable Energy, does not dispute that a random sample by recorders of the signatures submitted by initiative supporters turned up a validity rate of 72.4 percent. That 5 percent sample is the procedure required by Arizona law rather than having county election officials check every signature.

With about 454,000 signatures as a starting point – the number after Secretary of State Michele Reagan removed some petitions that clearly did not meet legal requirements – applying that sample should leave the Clean Energy for Healthy Arizona Act with about 329,000 valid signatures, far more than the 225,962 needed for constitutional amendments like this.

Johnson contends that experts hired by his group to review every signature found that about 195,000 of the people who signed the petitions are not registered to vote in Arizona. And that doesn’t even count whole petition sheets, with up to 15 signatures per page, that Johnson said should not be counted because the circulators were not eligible to gather signatures in Arizona.

But Johnson isn’t going to do a line-by-line argument in the five-day trial set to begin Monday. Instead, he plans to use the testimony of Jessica Grennan, the initiative’s campaign manager to prove that fact.

In an interview under oath Wednesday, Grennan testified that as of July 3, two days before the group submitted its signatures, it already had checked 465,712 of the signatures gathered. And as of that date, the initiative committee concluded that 220,181 were valid – a rate of 47.3 percent – short of what is needed to qualify for the ballot.

Yet Johnson said the committee still submitted all of the signatures gathered, even the ones it had not concluded were valid.

“What our whole premise is is that if you flood the system with enough signatures, you in essence are breaking the system,’’ he said.

What all this shows, Johnson said, is that the county recorders, so overwhelmed with the massive number of signatures, simply could not do a good job with verification. More to the point, Johnson contends the initiative organizers were counting on that.

Johnson said that Grennan’s deposition is a legally admissible admission that there aren’t enough valid signatures to allow the measure to go to voters.

“It doesn’t matter what the committee thinks,’’ he said. The only thing that does matter, Barton said, is what county election officials found.

He also said that Johnson is misrepresenting to Kiley what Grennan was saying.

Barton said what she testified to is that the committee was absolutely positive that 47 percent of its signatures were valid.

And the others? Barton said the committee could not tell for sure.

For example, he said, someone may have written in “Phx” instead of “Phoenix’’ for an address. Barton said there was no way for the committee to know for sure whether county recorders would consider that acceptable.

He also said a signer’s address may not match if he or she has moved subsequent to signing. But he said that does not matter as long as the signatures match, signatures that only the county recorders would have.

“The committee was very conservative in its validity estimates to ensure it had enough valid signatures,’’ he said. And that, Barton said, was borne out by the findings of the county recorders.

Campaign spokesman D.J. Quinlan was more direct in his critique of the legal efforts by APS to try to get the judge to ignore the findings from the random sample.

“What reason is there for doubting the work of the county recorders?’’ he asked. “They can literally show their work.’’

The initiative would require most electric utilities to get at least 50 percent of their power from renewable sources by 2030. It would override the current regulations of the Arizona Corporation Commission, which now sets such goals, mandating 15 percent renewable energy by 2025.

Pinnacle West and APS have taken the lead, arguing that such a high requirement, built largely on solar, would be more expensive. They also say it could make the Palo Verde Nuclear Generating Station, the largest in the country, impractical to operate as it cannot simply be turned on and off when there isn’t enough solar and renewable energy to meet demands.

Johnson is relying on more than Grennan’s deposition and the daily work sheets of the campaign committee to convince Kiley there are not enough valid signatures to let the measure go to voters.

For example, he contends many petition circulators were not properly registered with the secretary of state. Johnson said that means all the signatures they gathered cannot be counted, even if the people who signed the petitions were, in fact, registered voters.