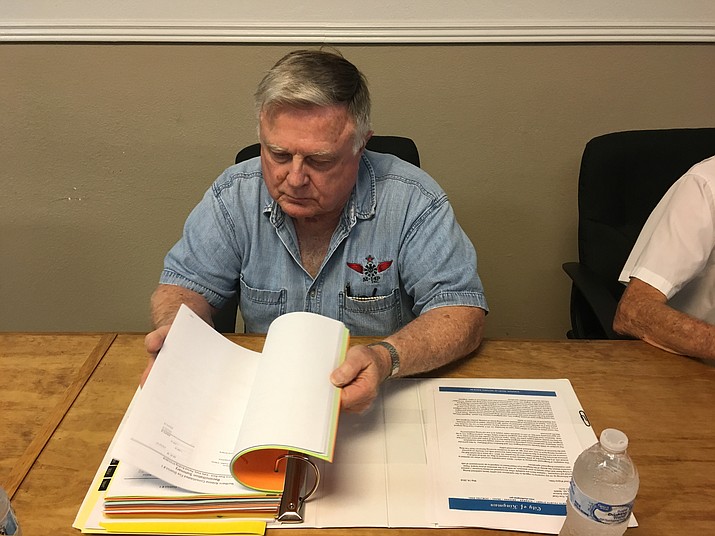 Carl Hays looks through agenda material before Thursdays board meeting of the Northern Arizona Consoldiated Fire District. Hays is under scrutiny of his legal residence in the district and signatures for his petition for election to the board. (Photo by Hubble Ray Smith/Daily Miner)

KINGMAN – Carl Hays remains under fire since his appointment to the Northern Arizona Consolidated Fire District board of directors, the most recent salvo coming from former board chairwoman Patti Lewis, who filed a lawsuit challenging Hays’ petition signatures and residency.

The case is scheduled to be heard at 1:30 p.m. Thursday, Aug. 23 by Judge Lee Jantzen in Mohave County Superior Court.

The suit names Hays, the Mohave County Board of Supervisors, Recorder Kristi Blair and Elections Director Allen Tempert as defendants.

Hays, who was appointed to fill the position vacated by Vic Riccardi, filed a petition to run for the NACFD board, needing 57 signatures from registered voters in the fire district. Only 42 were verified, Lewis said.

“The other part is he doesn’t show a residence in the state of Arizona,” she said Friday in an interview with the Daily Miner. “He shows a business, but no residence.”

Hays has maintained that his hangar at 4905 Flightline Drive at Kingman Airport qualifies as a residence, though inspectors from Mohave County Planning and Zoning have determined that it’s has no bedroom, bathroom or kitchen.

“During the inspection, I did not observe any sleeping furniture, beds or indication of utilizing the commercial occupancy for dwelling purposes,” Mohave County plans examiner Gilbert Smaby wrote in his May 22 report.

Hays walked away from questions posed by the Daily Miner about the legitimacy of his residency following Thursday’s board meeting.

“I don’t like the idea that that board is falling apart and half the guys working at the fire department are all upset,” Lewis said. “I don’t like them saying day to day they’re going to close my station. These guys out here don’t know if they have a job or not.”

Lewis contributed roughly $500,000 of her personal finances to build Fire Station 33 in the area of north Stockton Hill Road, and the station was closed under former Fire Chief Pat Moore when the district budget took a hit from the Great Recession.

Lewis resigned as chairwoman of the NACFD board after Hays and Erik Berg were appointed in April to replace Vic Riccardi and Sue Wilkin.

They were forced to resign from the board after conflict-of-interest charges related to the mechanical diagnosis of a fire district truck at Riccardi’s automotive repair shop in Valle Vista. Wilkin was cleared of felony charges, and Riccardi reached a plea agreement after spending a couples weeks in jail during the Christmas holidays.

Lewis said she stayed out of the NACFD quarrel until she was approached by board critics Arthur Gurnica and Rick Veradt, who asked for her help and are also listed as plaintiffs in the lawsuit.

“I went on this because of the election,” she said. “You’ve got to have proper things for that board and they don’t have it.”

The signatures fell short for a number of reasons, Lewis noted. Some of them don’t live in the district, and others did not have a city or town listed with their address, she said.

“If we lose this, it’s going to cause great big problems for the entire district, so hold your breath,” Lewis said.