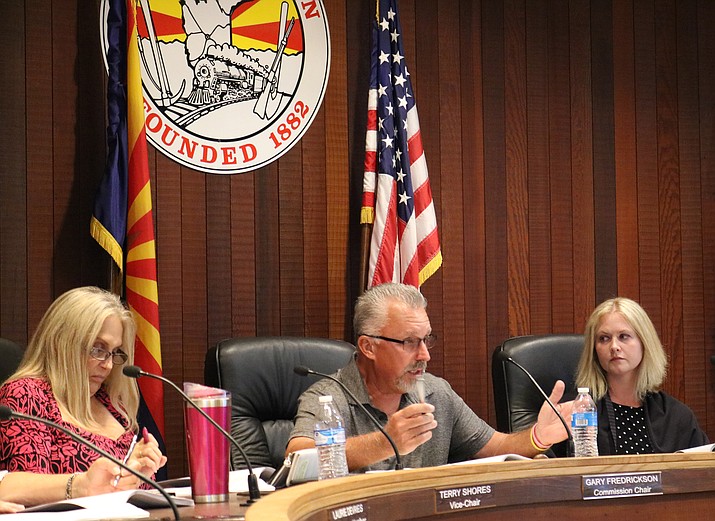 The Planning and Zoning Commission has yet to resolve the issue of cargo containers being used for storage in residentially-zoned districts, and is set to hold a work session on the issue. (Photo by Travis Rains/Daily Miner)

KINGMAN – The Planning and Zoning Commission made progress discussing cargo container allowances for storage purposes in residential areas at its meeting Aug. 14, but has yet to come to a final decision and opted to hold a work session to hammer out additional details.

One community member wanted to know why cargo containers would be limited to rural residential or R-1-40 because he was interested in having them in R-MH-6 districts.

“What we’re trying to potentially arrive at is starting slowly on allowing them,” said Commissioner Terry Hunsicker. “And make sure that we don’t make a bad decision on the subject and that we’re careful and cautious on how this potentially gets rolled out if this moves forward.”

Chair Gary Fredrickson said he’s researched alongside City staff and finds Option 3, not changing cargo container allowances, to be the best option. He believes people in the community wouldn’t appreciate staring at a large container while trying to enjoy a barbeque.

“I think when you have storage containers in residential areas that are up above the block walls already existing, it does block the view of the homeowners,” DeVries said.

However, Hunsicker saw valid arguments on both sides of the issue and Commissioner Scott McCoy supports expanding cargo container allowances. He said it makes no sense allowing containers as building material but not for storage.

“To me, logic would dictate that if you own a larger parcel of property, an acre or more, that typically you have animals and you have a lot of stuff that you should be able to lock up,” McCoy said. “And a metal storage container is probably the best choice to protect your property.”