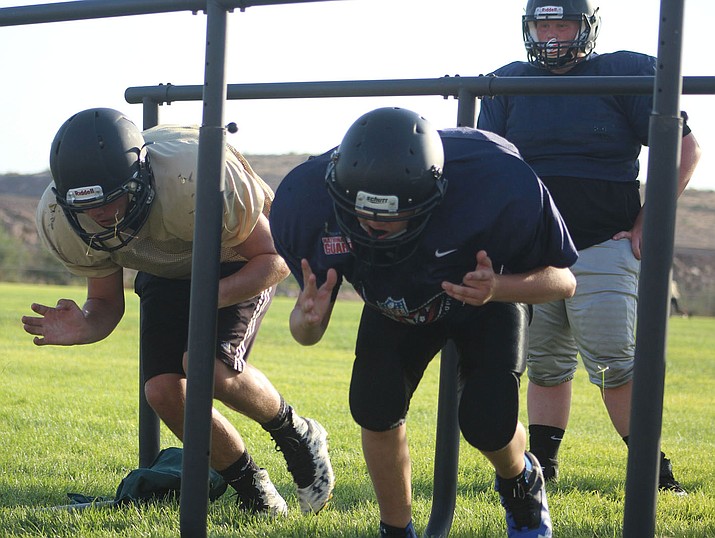 Kingman Academy linemen run drills during practice. The Tigers will depend on the big men up front to protect quarterback Dallas Edwards in the season opener Saturday against Utah’s Canyon View. (Photo by Beau Bearden/Daily Miner)

KINGMAN – There’s going to be a lot of differences for the Kingman Academy High School football team Saturday in Flagstaff.

Not only will the Tigers be led by first-year head coach John Morgando, but they’ll also be playing a different opponent on a different field for the first time since 2014.

“It could be good for us – a little change,” Morgando said. “We’re not playing the same team, so we don’t have that mental block. We’re playing on a different field. We’re still up at the elevation, which I think has been an issue for us in the past. But we’ve been doing a lot more conditioning to try to prepare for that.”

Academy and Utah’s Canyon View High will square off at Coconino High School at 11 a.m. Saturday during the Northern Arizona University Kickoff. The Falcons (0-1) opened their season a week ago with a 21-14 setback to Utah’s Beaver High.

“They’re going to be up one whole game and a scrimmage on us as far as experience this year – that’s a big deal,” Morgando said. “That’s where not having a scrimmage kind of hurts us a little bit. We haven’t gotten that play time against somebody else other than ourselves.”

Colten Shumway leads Canyon View into the contest after racking up 229 yards of total offense – 125 passing, 61 rushing and 43 receiving as the team’s quarterback.

The Tigers counter with junior Dallas Edwards as their signal caller after losing 2A Central Region Offensive Player of the Year Kekoa Makaiwi-Stroup to graduation.

“Dallas Edwards won the competition this summer,” Morgando said. “He’s been playing for us at the JV level for the past couple of years. So he knows the offense pretty well. He’s been reading it well in the summer.”

Edwards, however, will be without Academy’s top receiving threat from a season ago as Gabe Imus transferred to Lee Williams.

Imus racked up 1,022 yards and 14 touchdowns on 64 catches during his freshman campaign and the Tigers will look to a number of players to fill that void. Nate Perea will be in the mix after catching four touchdowns last year, while Stevie Wusstig also expects to be instrumental after rushing for 912 yards and 10 touchdowns in his junior season.

Those two won’t be the lone contributors for Academy though.

“With our low numbers, we have to fit guys where we can fit them,” Morgando said. “And we have a lot of guys playing on both sides of the ball. It’ll be different than some years past where we’ve been able to rotate quite a bit.”

An example is Trevor Lowry, who will play offense this season after never stepping foot on that side of the ball.

“One – he’s an explosive athlete,” Morgando said of Lowry. “Two – numbers-wise, we need him to play offense for us.”

Lowry should have no problem transitioning into a new role, just as Morgando will do Saturday morning in his debut as the leader of the Tigers.

Morgando knows there is pressure on him in the role, but he’s not experiencing any first-game jitters.

“I’m pretty even keel,” Morgando said. “I don’t have too many highs or lows. I stay kind of where I’m at, for the most part. There are certain expectations. You always want that win – it would be the first varsity win in game one. That would be great.”