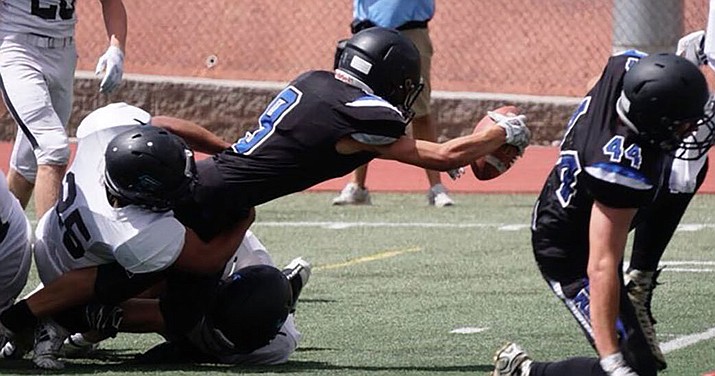 “On our end the biggest difference-maker was depth,” Morgando said. “We have a lot of guys playing both ways and we started getting really tired, even with some extra conditioning that we’ve been doing. Canyon View is a good team – they came out and they played hard. They had a lot of depth, they executed really well.”

Trevor Lowry scored the lone touchdown of the game for Academy with about eight minutes remaining in the first quarter. It was a great debut for Lowry on the offensive side of the ball after spending his career solely on defense.

That was all the success the Tigers (0-1) could find on offense though, as the Falcons (1-1) took a 27-6 lead into halftime and then added one more touchdown and two-point conversion in the third quarter. The contest was then delayed due to lightning and eventually called.

“You always finish what you started,” Morgando said. “We wanted to get some guys some reps and stuff like that. Both teams wanted to keep going, but the weather didn't let it happen.”

Academy looks to bounce back Friday with a 7 p.m. contest at Parker, which dropped a season-opening 35-0 loss to Wickenburg.

At Buckeye, the Lee Williams High School football team nearly pulled off a furious fourth-quarter rally Friday night, but came up short in a 22-20 setback to the Hawks.

“We were three yards away from going to overtime, but we just didn’t get it,” head coach Clint Sasse said of the two-point conversion. “That’s just how it goes sometimes. But the kids battled and that was great to see. There was no quit in anybody.”

The Vols (0-2) entered the fourth quarter trailing by 15 points and that deficit remained until there was about three minutes remaining. That’s when Lee Williams forced a fumble at the 5-yard line and quickly scored to inch within 22-14.

The comeback wasn’t over yet though.

“Mike Bathauer got in the backfield and stripped it again,” Sasse said. “We recovered it about the 40-yard line – drove down the field and scored. We called a two-point play that we didn’t execute on. We kicked the onside kick, didn’t get it and that’s all she wrote.”

Lee Williams tallied its first touchdown of the game when Donnie Simms returned the opening kickoff 80 yards for the score. Cody Ferrin added the point after and the Vols were up 7-0.

But bad field position plagued Lee Williams on a number of occasions, especially after the Vols recovered a fumble on the 2-yard line and it ended up being a Hawks safety.

The final result might have been different without that safety and Sasse knows it will be an area of focus.

“It has to be about execution on special teams,” he said. “That has to be the focus this week – flipping the field.”

Lee Williams returns home Friday for a 7 p.m. contest with River Valley. The Dust Devils (0-2) and Vols will be hungry to pick up their first win of the 2018 season.