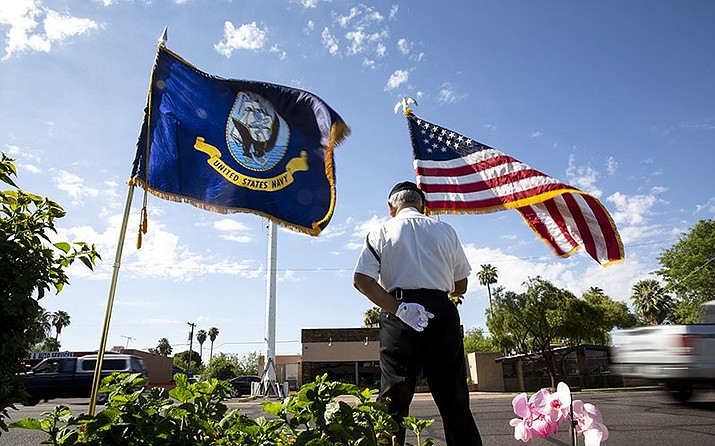 Ducey called it a “rare and distinct occurrence for a truly special man” in a tweet posted Sunday.

The six-term Arizona senator died Saturday, little more than a year after doctors diagnosed him with brain cancer. He was 81.

A private, formal ceremony is planned for 10 a.m. Wednesday at the state Capitol rotunda, honoring McCain’s “life and service to the State of Arizona and the nation,” according to johnmccain.com. The public can pay respects from 2-8 p.m. A live stream will be available here.

The practice to “lie in state” is an opportunity for the public to pay their respects, especially when a private funeral is planned. The person’s remains are usually on display in a coffin for viewing.

At the Arizona Capitol, this usually means the person will lie on the mosaic state seal, which is generally roped off, according to Secretary of State Michele Reagan. However, Reagan said in a message that these details for McCain had not been finalized early Sunday afternoon.

The memorial service is scheduled to begin at 10 a.m. Thursday at the North Phoenix Baptist Church. Members of the public can apply for a ticket to the funeral service through McCain’s website.

Following the memorial service, McCain’s body will be flown to Washington, D.C., out of Phoenix Sky Harbor International Airport. Details about when he will be moved to Washington were not provided Sunday.

McCain also will lie in state in the U.S. Capitol rotunda. He will be the 13th U.S. Senator to receive the honor, which is reserved for the country’s “most eminent citizens,” according to the Architect of the Capitol.

That ceremony will take place at 10 a.m. Aug. 31, when McCain’s family, congressional colleagues, staff and the public will honor his life and service.

On Sept. 1, a private memorial service will take place at the Washington National Cathedral. National and international leaders have been invited to attend, according to McCain’s website. A live stream will be available at McCain’s website.

Former Presidents George W. Bush and Barack Obama are expected to speak at McCain’s service in Washington, D.C. McCain had requested the two deliver eulogies at his funeral, according to CBS News.

Numerous media outlets reported that McCain did not want President Donald Trump to attend his services, instead offering an invitation to Vice President Mike Pence.

He will be buried at the U.S. Naval Academy Cemetery in Annapolis, Maryland.

Mourners have not waited to pay their respects to the senator, placing flowers, candles and flags near his office in Phoenix, the funeral home where his body was taken and the state Capitol after his death was announced Saturday.