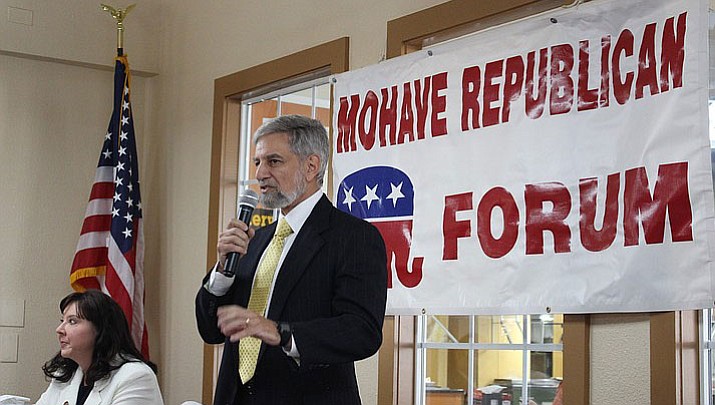 PHOENIX – Incumbent Secretary of State Michele Reagan found herself unable to hang on to her office Tuesday as she spent the campaign defending herself from election day problems from years’ past – some of those not even her fault.

Despite her incumbency, Reagan entered the Republican primary as an underdog, with challenger Steve Gaynor reminding voters in extensive TV commercials, bought with $1.5 million of his own money, about the things that had gone wrong in the past. And all of those problems ultimately proved insurmountable.

These most notably included the 2016 special election – the first one run by her office – where she failed to comply with state laws requiring voters to get pamphlets explaining the issues before they actually got their early ballots. And if that wasn’t bad enough, fellow Republican Attorney General Mark Brnovich said an investigation revealed that Reagan actually knew about the problem for weeks before she finally went public, calling the whole fiasco a “goat rope.’’

Voters also likely blamed Reagan for long lines at that election, though it is less clear how much was the fault of then-Maricopa County Recorder Helen Purcell and how much blame should go to Reagan who has oversight of all elections.

During the campaign, Reagan did not shy away from the problems but insisted they are ancient history. And she pointed out that her office had oversight of the 2016 primary and general elections which went off without problems.

Gaynor, who owns a commercial printing plant in California, also sought to portray Reagan as weak on illegal immigration, taking aim at her decision to sign a consent decree earlier this to end a lawsuit filed against the state by the Arizona Students Association and the League of United Latin American Citizens.

The deal removed some hurdles now in the path of those who want to register to vote. That includes not demanding new proof of citizenship to register if people already provided that to the Motor Vehicle Division. And it made it easier for people to move from county to county without having to provide new citizenship proof at their new address.

Gaynor, however, seized on one provision that requires the state to accept voter registration forms from those who do not have proof of citizenship, at least to vote in federal elections.

That simply brings Arizona into compliance with federal law which says people can vote for president and members of Congress, even without the proof of citizenship that Arizona law requires to cast a ballot for state and local offices. But Gaynor turned that into a charge that Reagan was making it easier for those in the country to vote and affect elections.

Reagan, while pointing out that Brnovich had approved the settlement, found it hard to shake the charges.

Gaynor also sought to stir up the same pot with his argument that federal law should be amended to keep Arizona from having to print ballots in any language other than English, though he later clarified that his views do not apply to Native American languages.

One thing working against Gaynor was his lack of political experience. That’s a significant issue as the secretary of state is first in line if a governor quits or dies in office, something that has happened multiple times in the past four decades.

Gaynor denied that his candidacy – and all the money he spent – was really a bid to be in line to be the state’s chief executive.

He said, though, he would be ready if thrust into that position. But Gaynor conceded he really does not know what the governor does, saying during a televised debate that if he is elected “I will study the governor’s office in order to be prepared.’’

Reagan sought to counter Gaynor’s money and attacks by saying she wouldn’t need to study what are the governor’s duties because of her 12 years in the Legislature.

Sen. Katie Hobbs, D-Phoenix, ran unopposed in the Democratic primary and faces off with Gaynor in November’s general election.