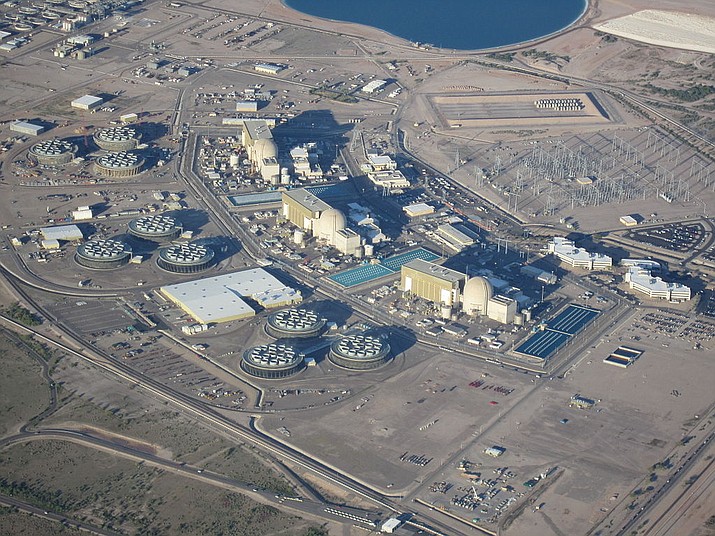 An aerial view of the Palo Verde Nuclear Generation Station near Tonopah. Arizona Public Service contends the station may need to shut down if the clean energy initiative passes. (Cuhlik photo)

PHOENIX – Arizonans are going to get a chance to decide whether they want to require utilities in the state to produce more of their power from renewable sources.

The Arizona Supreme Court late Wednesday rejected various claims by attorneys for Arizona Public Service that the initiative sponsored by California billionaire Tom Steyer lacks sufficient valid signatures to go to voters in November. The justices provided no details about what they found wanting in the APS legal briefs, promising an explanation later.

The decision drew fire from Matthew Benson, spokesman for Arizonans for Affordable Electricity, the group that has been financed with more than $11 million from Pinnacle West Capital Corp., the parent company of APS. He said both Kiley and the justices got it wrong.

But with the Supreme Court having the last word, Benson said the group now will focus on trying to convince voters that approval of the Proposition 127 will increase their electric bills, a contention disputed by initiative organizers.

Most Arizona utilities already are under orders from the Arizona Corporation Commission to produce 15 percent of their energy from renewable sources by 2025.

This measure, financed by California billionaire Tom Steyer, would boost that mandate to 50 percent, with a requirement to get there by 2030. And it would put that requirement into the Arizona Constitution.

Proponents of what is known as the Clean Energy for a Healthy Arizona say they want to reduce the state's dependence on fossil fuels which pump pollutants into the air. There also is a separate concern about the carbon dioxide produced which has been linked to climate change.

One of the arguments made by APS attorneys was that the initiative would mislead voters with its claim that it was promoting "clean'' energy.

APS takes the position that nuclear power, which has no smokestack emissions, also is clean energy. But the initiative would not count nuclear power toward that 50 percent goal, something the utility's lawyers argued is not made clear in the description of the initiative.

In his ruling – the one the Supreme Court upheld Wednesday – Kiley said it is not up to judges to decide what is "clean'' energy. But he rejected the contention that anyone was fooled.

Benson, in reacting to the ruling, said the initiative is not about clean energy.

"Everyone supports clean energy,'' he said. "The question is whether Arizona voters are willing to double their electric bills in order to approve Prop 127.''

APS and its supporters have produced studies to back their claim of higher electric rates. But initiative backers and their allies have responded with their own reports insisting that increased use of solar power, abundant in Arizona, would result in smaller bills.

Even if voters approve the constitutional amendment, it is an open question whether utilities will comply.

In anticipation of the initiative, APS got the Republican-controlled Legislature to approve a measure which says that utilities that violate the renewable energy standard would be subject to a penalty of no more than $5,000 – and potentially as little as $100 – potentially making it cheaper to ignore the mandate and pay the fine, even if they have to do it each day.

Rep. Vince Leach, R-Tucson, who sponsored the measure, said during hearings the intent of the law, which was signed by Gov. Doug Ducey, was to ensure that it would not matter if voters side with initiative organizers. He said it is the responsible of lawmakers to protect Arizona residents from out-of-state interests, specifically referring to Steyer.