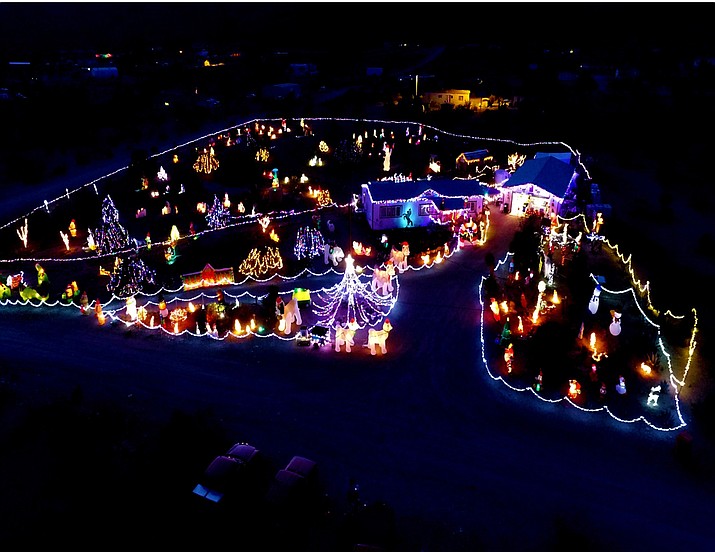 Meriwether’s Golden Valley Christmas display is up and running. The display includes about 100 blowups, 70,000 lights, a whole bunch of other display items and a special gingerbread house area. (Courtesy photo)

Meriwether’s Golden Valley Christmas display is up and running, and the glow on the horizon will be like the Las Vegas glow from more than 100 miles away. The display includes about 100 blowups, 70,000 lights, a whole bunch of other display items and a special gingerbread house area. According to Butch Meriwether’s wife, Chris Marie, the display will be up and running each night for at least four hours after sundown, and she plans on keeping the display up until Jan. 2. People who would like to visit the display at 2225 S. Dome Road in Golden Valley can do so by turning south on Egar Road (Mile Marker 17) from Highway 68 and drive south for 4 ½ miles and then turn right on Tapeats Drive (if you arrive at Shinarump Drive, you’ve gone one-half mile too far). Head west for about one-half mile and you can’t miss the display at the corner of Tapeats and Dome roads. Don’t forget that if you do decide to visit the Christmas display, the Meriwether’s would appreciate it if visitors brought a bag of dog or cat food to be donated to For The Luv of Paws and/or a new unwrapped toy to be turned over to the Marine Corps League Detachment #887, but it isn’t mandatory. The Marines will be passing out toys this year to local needy children. (Courtesy photo)