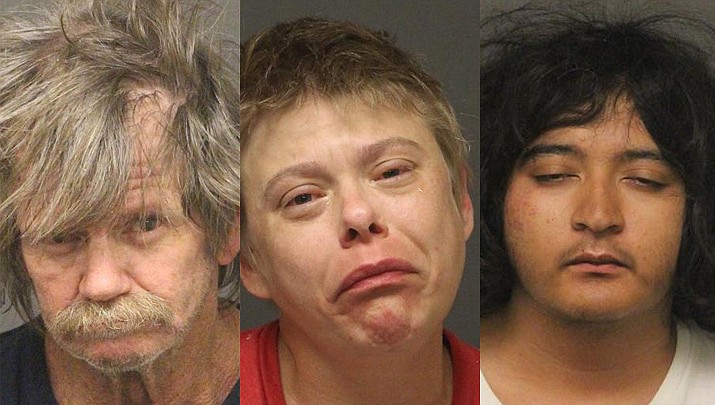 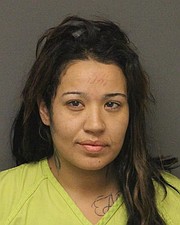 Jasmin Rey Hernandez, 24 of Covina, California, was arrested for an aggravated assault felony and a misdemeanor in shoplifting.

Mohave County Sheriff’s Office deputies responded to a business on Nov. 20 in the 4700 block of Highway 95 if reference to a disturbance. Upon arrival deputies observed the victim laying in the parking lot of the business.

The victim advised deputies that a female subject, later identified as Hernandez, had attempted to exit the business without paying for merchandise.

The victim chased after Hernandez, who got into her truck, and the victim grabbed onto the side of the truck in an attempt to stop Hernandez from leaving.

Hernandez then placed the vehicle in reverse and allegedly accelerated forward, with the victim still holding on.

The victim eventually fell off the side of the truck, and received several injuries. Witnesses on scene confirmed the victim’s story and was transferred to a nearby hospital for treatment.

Video surveillance from inside the store was reviewed and the amount of merchandise taken totaled approximately $150.

At approximately 10 a.m. on Nov. 21, deputies received a call from a neighboring agency that the truck had been located on Boundary Cone Road.

Hernandez and a male subject had been detained. Hernandez allegedly admitted to removing the items from the store, but didn’t know anyone was holding onto her truck.

The male subject was not involved and was released from the scene. All of the stolen items were recovered and Jasmin Rey Hernandez was booked into Mohave County Jail without incident. 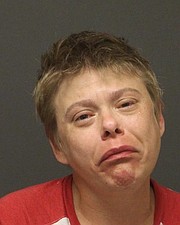 After multiple tased attempts, Brandalyn Wynn Kunkle, 37 of Bullhead City, was arrested at approximately 8:45 p.m. Nov. 22 in the 5200 block of Highway 95 in reference to a shoplifting.

Mohave County Sheriff’s Office deputies were contacted by the assistant manager of the store and the manager advised deputies that they observed a female subject, later identified as Kunkle, remove items from a shelf and then enter the restroom of the business.

The manager entered the restroom and heard the packaging being removed, and after Kunkle exited, the manager found the packaging without the merchandise. Kunkle then exited the store and went to a vehicle in the parking lot then returned inside.

Deputies made contact with Kunkle inside the store, when she placed her hands in front of her body and stated to “arrest her” and that she was a “shoplifter.”

When deputies advised Kunkle she was under arrest and attempted to detain her, Kunkle became non-compliant and began screaming at deputies.

As deputies attempted to detain Kunkle, she continued to scream, pull away from deputies and rotate her body in an attempt to free herself.

Deputies then placed Kunkle on the ground, where she continued to roll around, preventing deputies from placing her in handcuffs. A civilian stepped in and attempted to assist the deputy.

Deputies advised Kunkle she would be tased if she continued, when she rolled onto her stomach and locked her hands underneath her body. Kunkle was tased, but continued to resist.

The taser was deployed again, and Kunkle continued to resist, this time grabbing the deputy’s taser. A Kingman Police Department officer then jumped in to assist, and a third taser deployment was successful in placing Kunkle in restraints.

Once in custody, Kunkle admitted to removing the items without paying, with an approximate value of $50. 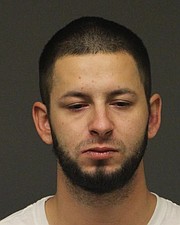 Jovanie Michael Price-Ramos, 25-year-old Golden Valley resident, was arrested by Mohave County Sheriff’s Office deputies at about 3:20 a.m. Thursday following a traffic stop and a report of a “destroyed” residence.

Deputies observed a vehicle heading west on Northern Avenue going about 60 mph early Thursday morning. The driver was identified as Price-Ramos after deputies conducted a traffic stop. At that time, MCSO reports deputies saw blood on the driver’s shirt and could smell alcohol from his person. They then received notice that a reporting party had called law enforcement and said her residence had been “destroyed.”

Deputies responded to the residence in the 3500 block of Devlin Avenue, where they saw broken glass on the floor, holes in walls and a damaged flat-screen TV. The victims said they were asleep when they heard a noise and saw a man, later identified as Price-Ramos, in their bedroom.

According to law enforcement, the victims stated Price-Ramos began to assault the male victim with a baseball bat, with the fight eventually moving to the living room, which caused the damage. The male victim broke away from the fight and ran to a friend’s house nearby. The female victim fled on foot with her young child.

Price-Ramos told deputies he moved out of the residence a few days before and reportedly admitted to entering the residence through a window and assaulting the male victim with a baseball bat.

Jovanie Michael Price-Ramos was arrested for three counts of felony aggravated assault, and misdemeanor counts of criminal damage and disorderly conduct. He was booked into Mohave County jail. 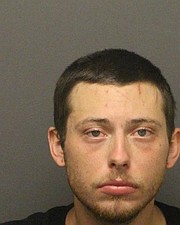 At approximately 4 p.m. Nov. 23, deputies responded to a residence in the 3100 block of Oro Grande Place to assist the Lake Havasu City Police Department in reference to a stolen vehicle.

The vehicle was reported stolen out of the Mohave County Sheriff’s Office in the Kingman area. Upon arrival, it was determined the vehicle was at the address and the driver was inside, identified as Walton.

After a few moments of verbal commands, Walton exited the residence and was taken into custody without incident. A search of the vehicle revealed a syringe loaded with methamphetamine and other drug paraphernalia.

Walton was booked into Mohave County Jail without incident. 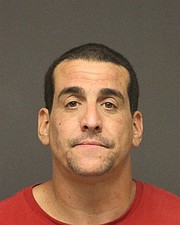 Joshua Leonard Husted, 39 of Fort Mohave, was arrested for assault and claims he was going for a jog after taking deputies on a foot chase.

At approximately 7:40 p.m. Tuesday deputies responded to a residence in the 7800 block of Whitewing Drive in reference to an assault.

The victim reported that she was at a friend’s house when Husted arrived and advised him they would be going to the casinos.

Husted allegedly began assaulting her by grabbing her hair and hitting her in the left eye. Husted then left the residence on foot. The victim’s statements were consistent with the bruising and swelling of her left eye.

A short time later, deputies responded to Husted’s residence in the 7800 block of Mallard Drive and observed Husted in the front yard. Deputies advised him he was under arrest for the assault. Husted then took off on foot and jumped a fence out of the yard.

A lengthy foot pursuit ensued with Husted running through several properties and jumping fences. Deputies, at one point, were close enough to advise Husted that if he didn’t stop he would be tased. Husted yelled obscenities back at deputies.

Deputies cornered Husted in a yard and he turned around and allegedly started towards them. Deputies deployed their taser and were successful in placing Husted in restraints.

Husted advised deputies he was going for a jog and didn’t hear deputy’s commands to stop. 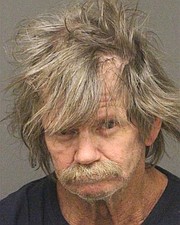 A traffic stop was conducted and deputies made contact with the driver, identified as Cochran. A records check revealed Cochran to have an active arrest warrant. A pat search revealed a baggie of methamphetamine in his jacket pocket.

David Jack Cochran was arrested and booked into Mohave County Jail without incident.