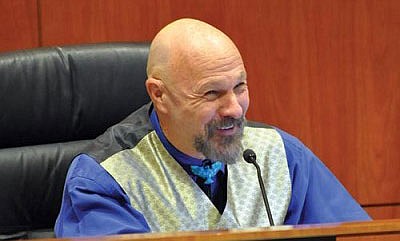 That last example has been a cause for concern with Mohave County Supervisor Buster Johnson after an almost 36-hour delay in obtaining voter registration data after this year’s election. The delay was caused by e-poll staff unfamiliar with the county’s electronic polling software. Now Johnson has requested reimbursement from e-polling provider Robis Inc. for the county’s lost time.

Data from Mohave County’s e-books is essential to the county’s electronic voting process, according to Johnson, because it allows County staff to know who voted, and allows the Elections Department to process ballots.

“When the recorder went to upload the data, she received several errors,” Johnson said. “The new project manager that was assigned to us was a new guy who wasn’t well-versed in how the system worked. While he did try to help us, the errors and delay caused the upload to not occur for one-and-a-half days after the election.”

Failing to upload such data prevented the Mohave County Recorder’s Office from counting early ballots, costing the county more than a day of productivity.

“It cost us manpower,” Johnson said. “I don’t think it was that much money, but our people worked straight through the election to make it work, and they shouldn’t have had to. Companies should have to pay for mistakes like this … there’s the idea that it could have been a lot worse, and it could have hurt the public’s trust. That’s the worst part. We lucked out, but there was a lot of worry on our part about getting it done on time.”

According to Mohave County Elections Director Allen Tempert, the delay was inconvenient for county staff, but not disastrous.

“The vendor worked with the Recorder’s Office to upload their data into our voting system. The new person didn’t know how to work with the e-polling system on the first try … but all of the votes were still counted before they were required the following Wednesday. They were still finished ahead of schedule.”

Johnson also indicated in his proposal that he would like for Mohave County’s e-polling software to be reviewed more often, to prevent any such problems during future elections.

Attempts to contact Mohave County Recorder Kristi Blair by telephone were unsuccessful as of Tuesday afternoon.