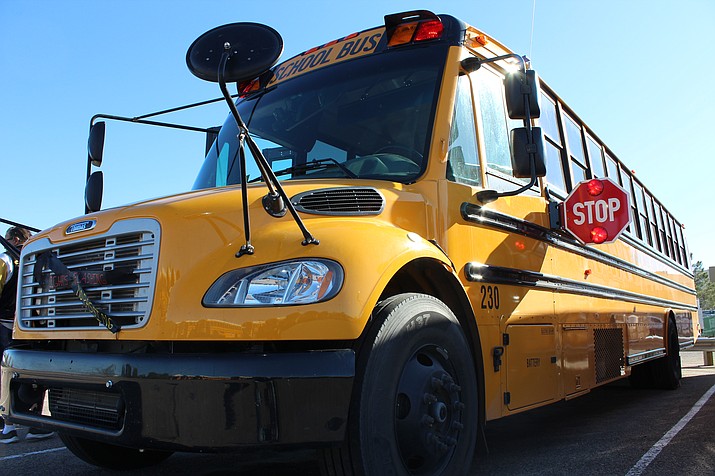 PHOENIX – More than four dozen Arizona school districts are getting new school buses at no cost to taxpayers.

Kingman Unified School District is getting 10 new buses, the second-most of any district announced. Washington Elementary in Phoenix is scheduled to receive 11.

Superintendent Roger Jacks was surprised to hear that KUSD is getting 10 buses when he only thought it would get five.

“We are amazed. We are really happy that they recognized the transportation mission we have up here,” Jacks said.

The tab for the 142 new buses is coming from the state’s $59 million share of a nationwide settlement with Volkswagen over the sale of its so-called “clean-diesel’’ vehicles. Gov. Doug Ducey had ultimate authority on how to divide the cash, within certain court-approved guidelines.

More districts may benefit in the future. The governor’s office said it is still reviewing the applications from another 63 districts to see if they qualify.

What’s getting the state all this cash is a decision by Volkswagen in 2016 to settle a lawsuit about the marketing of vehicles under the VW, Audi and Porsche labels as having lower pollution.

It turned out that really wasn’t the case.

Instead, VW engineers had installed a “defeat device,’’ programmed to go into a low-emission mode during testing but then spew out pollutants at much higher – and illegal – levels when actually on the road to improve performance.

VW eventually pleaded guilty to three felonies, including defrauding the U.S. Environmental Protection Agency. The company agreed to $4.3 billion in penalties and another $4.9 billion to address pollution from the supposedly low-emission diesel vehicles.

Arizona’s $57 million share was not unrestricted. Instead, it had to be spent on projects to reduce emissions of oxides of nitrogen, the very pollutants the VW vehicles were spitting out above permissible levels.

That’s where the plan for new school buses comes in.

State officials figure that for each aging school bus replaced, those with at least 100,000 miles, emissions of nitrogen oxides will be reduced by nearly 1.4 tons over that vehicle’s anticipated 12-year life.

And Dawn Wallace, the governor’s education adviser, said 80 percent of the money awarded is going to school districts in areas which already are in danger of violating clean-air standards.

The decision of how to spend the money is not without controversy.

Last year Chispa Arizona, an arm of the League of Conservation Voters, submitted petitions with more than 16,000 names to Ducey requesting that he use the money to replace the aging diesel buses with zero-emission vehicles. They argued that is the only way to ensure that school children are not exposed to dirty air and cancer-causing pollutants from tailpipe emissions.

But Ducey’s office opted not to replace the diesel buses with electric vehicles.

Aides to the governor said the decision starts with the fact that fewer than 50 electric school buses could be purchased for the same price as more than 150 conventionally fueled vehicles. And, by extension, they said that replacing that many diesel-powered buses with new ones results in about 36 percent less overall pollution than buying fewer zero-emission buses.

Oh, and don’t look for those old school buses to be sold or given away. The settlement requires that vehicles being replaced be made inoperable through a hole in the engine block and a cut in the frame.