Arizona gas prices 40 cents above national average, but on the decline 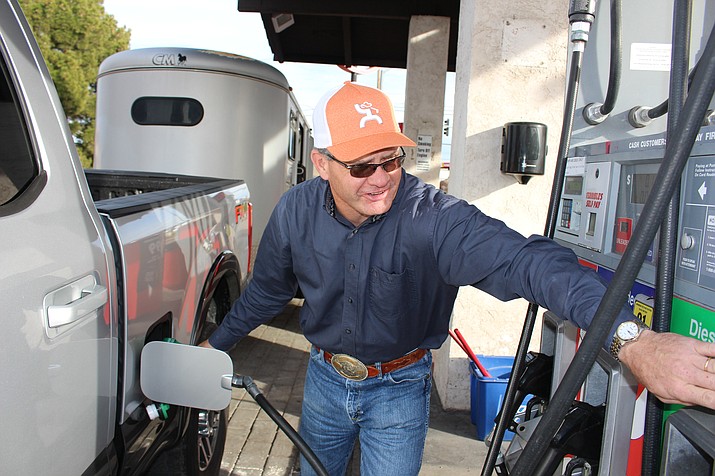 Dusty Reidhead of Show Low selects diesel fuel at $3.29 a gallon Monday at Terrible’s on Route 66. Arizona gas prices are trending higher than the national average, according to GasBuddy.com. (Photo by Hubble Ray Smith/Daily Miner)

KINGMAN – Prices at the gas pump rise and fall with no apparent correlation to the cost of crude oil on the futures market, though that’s considered a reliable long-term indicator.

Several factors influence the price of gasoline in Arizona, including supply and demand, costs of crude oil and blend stocks, fuel surcharges and state taxes.

Regular unleaded is advertised at $2.69 a gallon and diesel at $3.29 a gallon Monday at Terrible’s on Route 66. (Photo by Hubble Ray Smith/Daily Miner)

“We’re kind of at their mercy,” Dusty Reidhead said Monday while filling up his Ford F-250 at Terrible’s on Route 66. “I don’t understand why gas prices are what they are. I have no idea.”

Reidhead, from Show Low, was towing a horse trailer, returning from Las Vegas where his daughter competed in the Junior National Finals Rodeo. He estimated his truck gets about 14 miles a gallon.

He was paying $3.29 a gallon for diesel at Terrible’s, which was cheaper than the $3.53 at Chevron across the street.

GasBuddy reported 27 states where prices could be found under $2 a gallon, with Missouri averaging $1.98 a gallon. Other states hovering around $2 a gallon are Oklahoma, South Carolina, Texas and Kansas.

“Average gas prices have continued to move lower in most states in the last week as retail prices continue to catch up to the low price of oil,” Patrick DeHaan, petroleum analyst for GasBuddy, said in his blog.

“While the going has been good at most gas pumps, OPEC countries did agree to curb oil production, but the cut was smaller than we had expected and for a shorter duration than anticipated, resulting in a small upward move in oil, one that may not immediately curb the declines.”

The nation is poised to see prices drop at least one more week, and could end the year in the $2.30 range, he added. The national average is down 5 cents from a year ago and 29 cents from a month ago.

Prices at the pump are playing catch-up with the relatively low price of crude oil, which was 65 cents lower Monday at $51.96 for West Texas intermediate crude oil.

Setting aside the daily cut and thrust of energy markets, the longer term sees lower energy prices yield potentially higher demand and perhaps a not-so-insignificant boost to the global economy as a whole as the cost of energy wanes, analyst DeHaan said.

“I don’t really pay too much attention,” said Deb Green, who was paying $2.70 a gallon for regular gas at Terrible’s. “I know it’s down from what it was. I don’t get gas that often.”