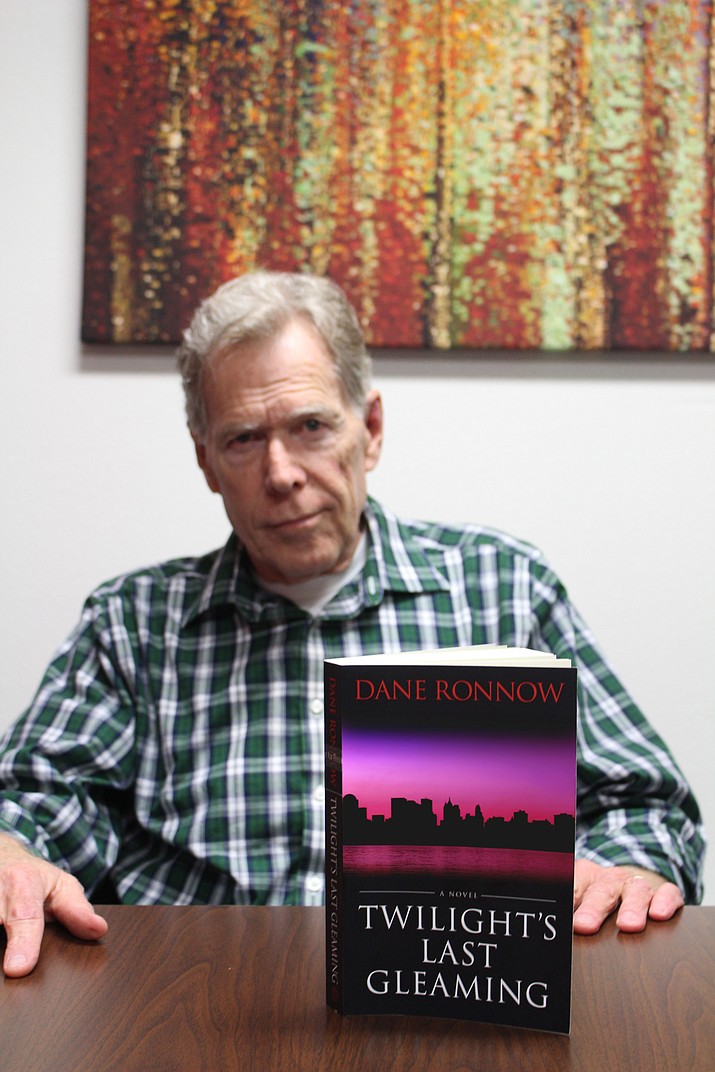 Kingman's Dane Ronnow shows a copy of his book, "Twilight's Last Gleaming," a thriller about the nation's electrical grid and infrastructure being completely shut down after a nuclear attack. The book goes on sale Saturday for $14 on Amazon. (Photo by Hubble Ray Smith/Daily Miner)

KINGMAN – Dane Ronnow started monkeying with the idea of writing his first thriller novel a couple years ago when he wondered what would happen if the nation’s electrical grid was wiped out.

He had read Congressional testimony from 2004 about the technical aspects of electromagnetic pulse, or EMP, and how it could affect America’s electrical grid and the entire national infrastructure.

“I believe they were looking at the costs of hardening our infrastructure against an attack and it was so overwhelming, they pushed back and said they didn’t think it would happen,” said Ronnow, who retired after 12 years as graphic designer for the Daily Miner.

His book, “Twilight’s Last Gleaming,” goes on sale Dec. 15 for $14 on Amazon. The 362-page, 95,000-word novel is about the possibility and consequences of a complete shutdown of the country’s electrical grid. It’s published by Mohave Publishing Co., owned by his wife, Dianne.

Instead of writing about the post-apocalyptic world, Ronnow focuses on the events leading up to catastrophe. What were the decisions of the U.S. president? Who was analyzing threats of nuclear attacks from North Korea and Iran?

“The trade war going on is threatening to destroy the supply line,” Ronnow describes of his plot line in an interview at the Daily Miner. “Russia gives Western manufacturers 60 days to get out … Ford, General Motors and Volkswagen. In other words, Russia is divorcing the West, essentially, and China unloads its holdings of U.S. Treasuries. It collapses our debt market and the economy is headed over the cliff.”

As the President struggles to maintain balance in a world spinning out of control, North Korea and Iran join forces to launch a nuclear weapon and detonate it over the United States, shutting down our electrical grid.

Part of the book describes what happens following the attack, how urban centers are left without basic utilities of water, power and gas.

The last part is about “picking up the pieces,” Ronnow said. Even a year and a half down the line, 30 percent of the population is left without electricity.

“The story is what EMP is, what it does and the reality is it is possible. The other underlying aspect is how unprepared people were. Hurricane Sandy hit and nobody had anything in their cupboards,” he said.

Ronnow got help developing a couple of the characters from his brother, John, who served in the U.S. Army Special Forces, or Green Beret.

“John was saying everyone nowadays is fixed on Navy Seals, but no one really talks about the Green Beret. They were tough guys. It would be nice to introduce a couple guys as former Green Beret,” the author said.

Ronnow was a little worried when he had 90 percent of the book written and hadn’t figured out how it would end.

“There’s no way to have a happy ending. There’s still 65 million people without power,” he said.

Ronnow had three family members read the finished manuscript, including his brother, a voracious reader of thrillers, who said, “Don’t change a thing.”

“I have a background in writing, but I never wrote a lot. I wrote 10,000 words on how this came to pass and I kicked it around a bit. It was slow-moving at the time, but I knew I could write a book on this,” he said.