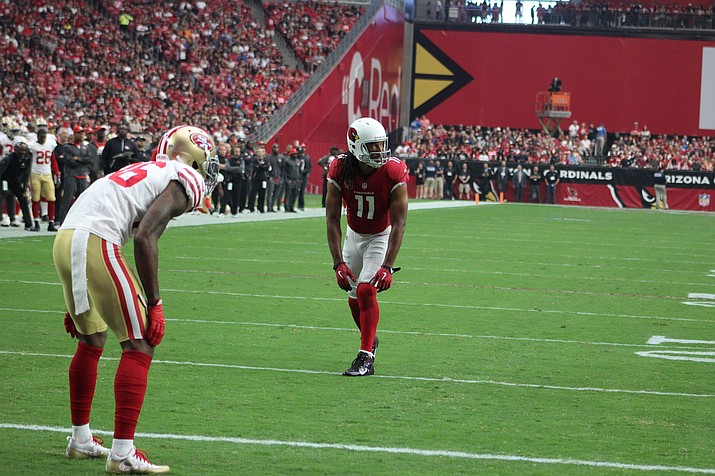 In this 2017 file photo, Larry Fitzgerald lines up against the San Francisco 49ers. Fitzgerald made his 1,282nd career catch to surpass NFL Hall of Famer Jerry Rice for the most receptions with one team in NFL history during the Arizona Cardinals' 17-3 loss to Detroit on Sunday, Dec. 9. (Daily Miner file photo)

GLENDALE — The Arizona Cardinals had hoped for the first winning streak of the season after a morale-boosting win at Green Bay in the snow last Sunday.

But the Cardinals offense regressed in a 17-3 loss to the Detroit Lions on Sunday, which dropped Arizona to 3-10.

The Cardinals gave up three sacks and struggled to deal with the Lions' pass rush, and they ran for just 61 yards as a team, averaging 2.9 yards per rush.

In the end, their worn-down defense couldn't keep the Cardinals close in the final minutes.

"We didn't create any movement up front on the offensive side of the ball to generate some positive plays on first and second down," Cardinals coach Steve Wilks said.

"We have to do a much better job protecting the quarterback, allowing him to go through his progression. And we have to protect the football."

Wilks said he was "extremely surprised" at his team's performance coming off the win at Lambeau Field.

"Great momentum, big win. We had a great week of practice," Wilks said. "We have to learn how to finish. That's what we didn't do."

The Cardinals were able to avoid being blanked for the second time this season thanks to Zane Gonzalez's field goal in the fourth quarter.

The offense sputtered with only five first downs in the first half and no points from its best drive, which ended in a missed 54-yard try from Gonzalez.

"Sometimes when you go three-and-out early, it's hard to get in any kind of rhythm," quarterback Josh Rosen said.

The second half was only slightly better, but saw the Cardinals booed after a three-and-out late in the third quarter.

The fans cheered loudest for the continuation of longtime wide receiver Larry Fitzgerald's streak of games with at least one catch, which is up to 224.

Fitzgerald figured to be more of a focal point with Christian Kirk out for the season because of a broken foot.

But Fitzgerald — who became the NFL leader for most receptions with one team at 1,286 — had one catch through three quarters.

Down 3-0 in the third quarter, the Cardinals had three straight first downs on their second possession of the second half. Then Rosen was intercepted by the Lions' Darius Slay, who returned the ball 67 yards for a touchdown.

"It'll be a frustrating Monday," Rosen said, looking ahead to breaking down the offense on film, "but a Monday that needs to happen."

On the drive for the field goal, the Cardinals — looking for some way to get points — tried a direct snap to rookie running back Chase Edmonds on first and goal from the Detroit 8, but it resulted in a holding penalty that backed them up 10 yards.

Arizona had to settle for Gonzalez's 22-yard field goal with 8:14 to play. The Cardinals finished with eight penalties for 83 yards.

Still trailing only 10-3, the Cardinals still had a chance. But the Lions handed the ball off to running back Zach Zenner seven times on a drive, the seventh carry was a 1-yard touchdown that sealed Detroit's win.

"We have to be able to muster up more than three points," Fitzgerald said. "Converting more consistently on third downs and extending drives would be huge."