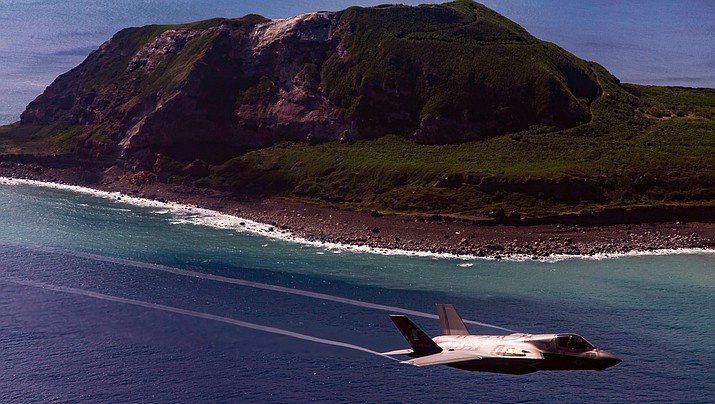 The U.S. military said Tuesday that five missing crew members have been declared dead after their refueling plane collided with a fighter jet last week off Japan’s southern coast, and search and recovery operations have ended after finding only one survivor. (U.S. Marine Corps photo by Lance Cpl. Seth Rosenberg)

TOKYO – The U.S. military said Tuesday that five missing crew members have been declared dead after their refueling plane collided with a fighter jet last week off Japan's southern coast, and that search and recovery operations have ended after finding only one survivor.

The five were on a KC-130 Hercules refueling aircraft that collided last Thursday with an F/A-18 Hornet during regular training. The warplanes crashed into the sea south of Japan's Shikoku island.

Two crew members in the F/A-18 were recovered after the accident, but one died. The U.S. Marines said the survivor was in stable condition when rescued.

The search, joined by Japanese and Australian forces, was halted Tuesday, and the cause of the crash is still under investigation, the Marines said in a statement.

It said the identities of the five people declared dead will be released after their next of kin are notified.

The Marines earlier identified the dead pilot of the F/A-18 as Capt. Jahmar Resilard, 28, of Miramar, Florida.

Japanese Prime Minister Shinzo Abe sent a message of condolences to U.S. President Donald Trump, while praying for a speedy recovery of the injured. Abe thanked American troops for their dedication and vowed to cooperate with Trump to further strengthen their alliance to promote regional peace and stability.

"The loss of the outstanding members of U.S. Marine Corps is my deepest regret, and I myself and the Japanese people share deep sorrow of the American people," Abe said. "Japan-U.S. alliance is supported by the dedication of each U.S. military personnel, and I offer my heartfelt condolences to the victims."

The crew members of the refueling aircraft were based at Iwakuni air station near Hiroshima as part of the Marine Aerial Refueler Transport Squadron 152, whose call sign is Sumo.

"All of us in the Sumo family are extremely saddened following the announcement of the conclusion of search and rescue operation," the squadron's commanding officer, Lt. Col. Mitchell T. Maury, said in the statement. "We know this difficult decision was made after all resources were exhausted in the vigorous search for the Marines."

"Our thoughts are heavy and our prayers are with all family and friends of all five aircrew," Maury said.

The Marines statement said it has not been confirmed whether the two planes were involved in aerial refueling when the collision occurred.

The crash is the latest in a series of recent accidents involving U.S. military forces deployed in and near Japan.

Last month, a U.S. Navy F/A-18 Hornet from the aircraft carrier USS Ronald Reagan crashed into the sea southwest of Japan's southern island of Okinawa, though its two pilots were rescued. In mid-October, a MH-60 Seahawk also belonging to the Ronald Reagan crashed off the Philippine Sea shortly after takeoff, causing non-fatal injuries to a dozen sailors.

More than 50,000 U.S. troops are stationed in Japan under a security pact.