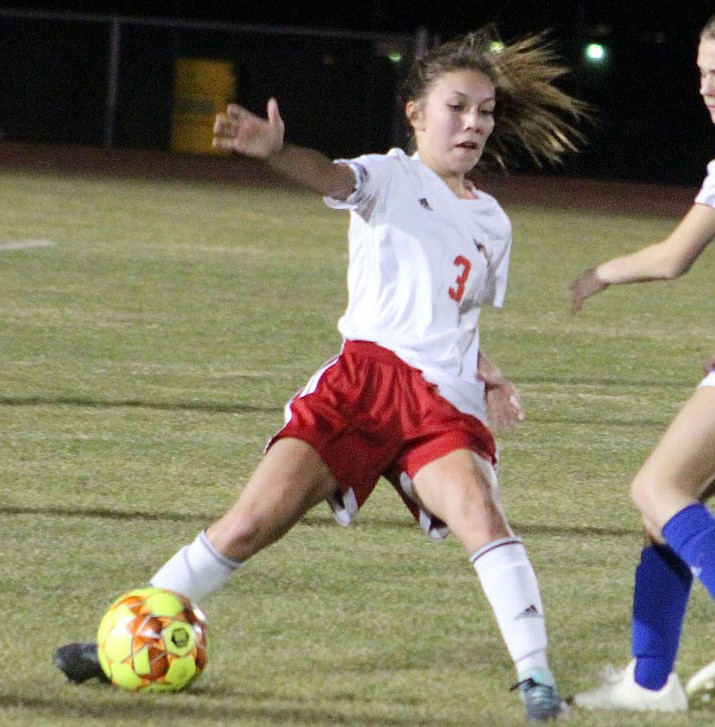 KINGMAN – It was a busy weekend for the Lee Williams High School girls soccer team.

“I’m very proud of what this team was able to accomplish and to see what the future holds for them,” said Lee Williams head coach Chris Selby.

The Lady Vols opened the tourney with a 1-1 tie against Kingman High, followed by a 3-2 victory over Lake Havasu Friday. The final day of action started with a 2-1 win over River Valley and a 2-2 stalemate with Mohave.

“We beat River Valley 2-1 on a game-winning goal from Mackenzie Cathey with 35 seconds left,” Selby said. “We were up 2-0 at halftime versus Mohave, but they tied it up 2-2.”

Lake Havasu won the tournament with 29 points, while Lee Williams finished with 26 points for second.

“Amrist Kelso played amazing at goalkeeper in all four games and Natalie Sanchez was a force at defense,” Selby said.

Cathey led the Lady Vols offensively during the tournament with four goals and an assist, while Sadie Serrano tallied two goals and four assists.

Kendra Pease (two goals, one assist) and Cindy Ramirez (one assist) rounded out the top performers.

“Overall this tournament was a good experience for the team and coaches,” said Bulldogs head coach Kevin Roberts. “We play Lake Havasu and Parker later in season, so it was good to see what we’re up against. Also we were able to play some JV players in the process.”

The Bulldogs knocked off River Valley 7-1 Thursday and then followed it up Friday with a 3-2 win over Parker.

A win or tie would have advanced the Bulldogs to the championship game, but instead they faced Lake Havasu in the third-place game. Kingman fell 5-0 to the Knights.

“This (tournament) experience was good for the team,” Roberts said.