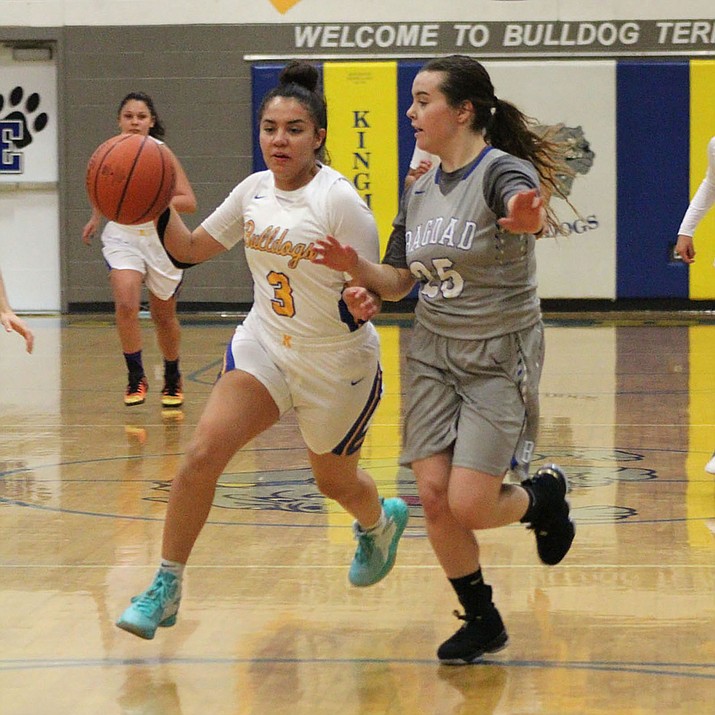 Sukwana Quasula led the Lady Bulldogs with 22 points Monday night in a 49-21 win over Bagdad. (Photo by Beau Bearden/Daily Miner)

KINGMAN – There’s no guarantee a team can find its identity early in the season, especially with a new head coach. The Kingman High School girls basketball team is proving otherwise as it won its fifth straight game Monday in a 49-21 rout of Bagdad.

“The best thing that’s happened for us in this stretch of games is we all found where we belong,” said Lady Bulldogs coach Kevin Hubbard. “We all found our role and who we are on the team. We’re all playing it the best we can and when that happens, teams start looking really good.”

The Lady Bulldogs have also focused on a simple philosophy – defense first. It almost proved costly for Kingman as a couple players faced early foul trouble, but that didn’t stop the intensity.

“I’m proud of the way they played defense, even though it got a little dicey with Payton (Chamberlain) and Star (Talayumpteua) picking up three fouls early,” Hubbard said. “So it was hard to focus on that defensive effort, but we did. And that’s what mattered in the end.”

That mentality showed itself in the second quarter as the Lady Bulldogs outscored Bagdad 14-2 to pull away for a 25-13 halftime lead. Even with a comfortable margin, Kingman kept its foot on the pedal in the second half as Sukwana Quasula led the charge with 10 of her game-high 22 points.

“She’s that leader that keeps her head down and keeps playing,” Hubbard said of Quasula. “She doesn’t let emotions get to her very often, which is nice. She plays cool-headed all the time and leads by example.”

The Lady Bulldogs also had another leader step up, but in a new role as she works her way back from a hand injury.

“Kearra (Tauta) leads the younger second unit and she provides a good punch coming off the bench” Hubbard said. “Sometimes it’s something that teams don’t see coming – she’s kind of our secret weapon. … I think she’s the best sixth man I’ve ever coached, to be honest.”

Tauta finished the night with eight points, while Chamberlain added seven points. Shauntel Crozier and Melody Jackson chipped in four points each to round out the top performers.

But even more impressive is the fact Kingman allowed only three Lady Sultans (5-3, 2-0 1A West) to score and continued a streak that dates back to a 44-36 win over Paradise Honors on Dec. 4.

“Defensively, through the last (four) games, we’ve held everyone we’ve played to 40 points,” Hubbard said. “If we play that kind of defense, we’re going to go a long way.”