Judge: Rep. Shooter has no legal right to notes, interviews from investigation 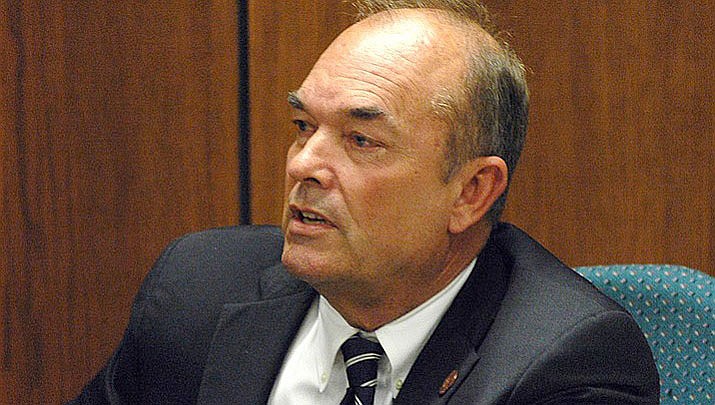 PHOENIX — Former state Rep. Don Shooter has no legal right to the notes and interviews of investigators whose report led his colleagues to eject him from the House of Representatives.

In an extensive ruling Monday, Maricopa County Superior Court Judge Bruce Cohen said the work of the two attorneys hired by House Speaker J.D. Mesnard is protected by attorney-client privilege. And Cohen said that Mesnard did not waive that privilege when he released the final 82-page report or even provide the public with some additional documents.

But Cohen said there’s also another problem with the subpoenas that Kraig Marton, the attorney for the ousted Yuma lawmaker, has issued for the materials.

He pointed out that Shooter wants the documents to defend himself in a civil lawsuit filed by Rep. Michelle Ugenti-Rita, R-Scottsdale, who was listed in the report as one of the victims of Shooter’s sexual harassment.

Her lawsuit charges that Shooter is guilty of slander, libel, battery and negligence.

He, in turn, has filed a counterclaim accusing her of defamation. And Shooter contends the notes and interviews of about 40 witnesses conducted by the investigators for the House are material to the outcome of this lawsuit.

But Cohen pointed out that Shooter is not seeking documents from Ugenti-Rita related to the lawsuit but instead documents from the House report that led to his removal.

Only thing is, neither Mesnard nor the House are parties to the lawsuit. And that, Cohen said, presents a legal barrier to Shooter using this lawsuit to go after the documents he wants, which are the property of the House.

“The actions taken by the House of Representatives (and the) speaker of the House surely have common facts to the claims now before this court,’’ the judge wrote. “But one did not cause the other.’’

Cohen said what Marton effectively is arguing that if it were not for the actions of Mesnard and the House in producing the report, there would be no basis for Ugenti-Rita’s claims.

“In a metaphysical sense, that is perhaps true,’’ Cohen said. “If one set of events did not occur, perhaps the second set of events might not have occurred.’’

That report found “credible evidence’’ Shooter violated anti-harassment policies several times with Ugenti-Rita, including making sexual comments and suggestions and making “unwelcome sexualized comments’’ about her breasts. It also found incidents of harassment and improper conduct or comments involving others.

But the judge said none of that proves that Ugenti-Rita would not have sued Shooter had Mesnard or the House not produced the report in the first place. So Cohen quashed the subpoenas issued by Marton.

Shooter, in a prepared statement Monday, indicated that he is not ready to give up on getting access to the documents.

He contends they will help him in his lawsuit by proving that Ugenti-Rita herself is guilty of sexual harassment of others. That evidence, Shooter said, was deliberately left out of the final version of the report -- evidence he said is central to the lawsuit.

“At the direction of the speaker of the House, the existence of this victim, though documented by the investigator, was excluded from the taxpayer-funded ‘independent’ investigative report,’’ he said. “The evidence we seek, already provided by the victim to the state’s investigator, will shed light on my accuser’s lack of truthfulness.’’

The closest the final report comes to questions about Ugenti-Rita’s own actions is that investigators sought to determine if she was complicit in sending what were described as “unsolicited, sexually explicit communications’’ to someone who is believe to be a female former staffer. The report described these as “egregious and potentially unlawful acts.’’

But the report also says that Brian Townsend, a former House staffer to whom Ugenti-Rita used to be engaged, accepted sole responsibility for sending these out and the matter was not pursued. Shooter contends the details of what the attorneys learned -- and pictures themselves -- were in early versions of the report but excised before its release.

In his statement Monday, Shooter also took a shot at Mesnard, calling him “a corrupt man in power’’ for covering up the allegations against Ugenti-Rita.

Mesnard told Capitol Media Services he will not comment while there is litigation pending.

That includes not only this lawsuit. Shooter already has filed a $1.3 million claim against the House -- the legal precursor to a lawsuit -- related to his ouster.

Shooter has made no secret that he hopes the release of all the notes and witness interviews will help him clear his name -- or at least provide voters with a more complete picture of the issues that resulted in his ouster.

“I think there’s going to be a tremendous amount of information that will damage the credibility of my accuser and, in addition, will bolster my view of the facts,’’ he told Capitol Media Services earlier this year.

Whatever Shooter manages to get -- if anything -- comes too late to immediately salvage his political career.

After his ouster, Shooter made a bid to get elected to the state Senate. But he came in third in the three-way Republican primary.

Cohen said while he won’t give Shooter the investigators’ notes or interviews, the report they produced actually will help him defend himself in this lawsuit. The judge said that, in effect, the House investigators have done some of his legal legwork for him.

“With minor exceptions, the report identifies for him the names of witnesses who may have information relevant to these proceedings,’’ Cohen wrote. He said Shooter is free to interview all of those witnesses “and there is nothing that prevents him from doing so because of the non-disclosure of privileged or work product information.’’