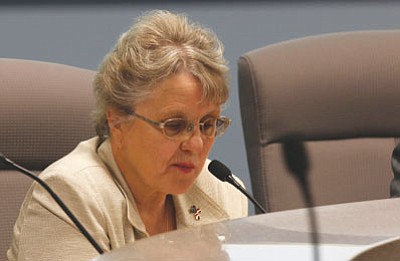 PHOENIX (AP) – Diane Douglas, now within weeks from leaving office as state superintendent of public instruction, says she'll miss the privilege of serving Arizona's children, but not the politics.

Her four-year tenure was frequently marred by political drama, starting with conflicts with Gov. Doug Ducey and members of the state Board of Education and more recently with squabbles over the Red for Ed teacher-pay movement and curriculum standards, the Arizona Capitol Times reported.

Douglas's re-election bid to remain as the elected head of the state Department Education was thwarted when she narrowly lost the Republican primary to Frank Riggs, who then lost the general election to Democrat Kathy Hoffman. She takes office in January.

Douglas doesn't blame her loss on her "bumpy start" as superintendent, but on a fractured Republican Party and a chaotic political landscape that included Red for Ed.

She said teachers had strong support among the public because of low pay and lackluster classroom conditions but that their support took a hit in last spring when protesting teachers and support staff walked out of schools and rallied at the state Capitol.

Douglas' own backing suffered when she suggested the certifications of participating teachers were at risk despite the state's teacher shortage.

Before and after the teacher pay brouhaha, Douglas stirred controversy when she advocated for curriculum standards that critics argued were influenced by her personal religious beliefs. Her proposals died, which Douglas blamed on a hostile media.

Meanwhile, Republicans didn't unite behind her re-election bid. She struggled to stay on message and attracted donors.

"I am admittedly very conservative," she said. "And it just became a five-person race of trying to out-conservative each other."

While she was running on her record, she said her opponents ran on political rhetoric to get votes. That left the party with Frank Riggs as the unsuccessful GOP nominee.

Douglas said she's concerned that Hoffman will have a knowledge gap that won't be resolved by her experience as an educator.

"She needs to know what she doesn't know first and foremost," Douglas said of Hoffman.

If she can't do that, Douglas fears the learning curve ahead could spell chaos for kids.

Douglas said she'll miss the kids but not the political realm.

She said she has no regrets, certainly not for her early squabbles with Ducey and the Board of Education over her firing of the board executive director Christine Thompson and Thompson's top aide.

Ducey said Douglas had acted illegally, and the board voted 7-1 directing Douglas to let the pair back into the department's building.

Douglas said she kept her promises to voters, and she didn’t back down when faced with political ramifications.

“No disrespect intended, but we talk a lot about cleaning the swamp in Washington. Well, it’s not the only political swamp that exists,” she said Dec. 10 on KAET-TV’s “Horizon” show.