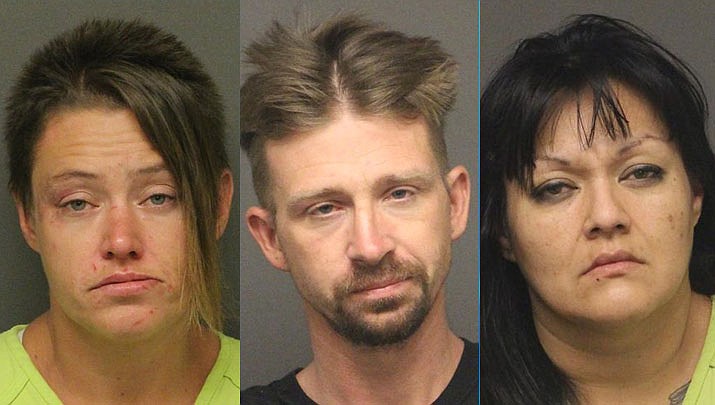 A call to Mohave County Sheriff’s Office led to three men being arrested on charges of stolen vehicles, drugs and outstanding warrants.

MCSO deputies arrived at a home in the 4300 block of Benton Street at about 9:30 a.m. Dec. 10 after they were alerted to suspicious activity at the residence.

Deputies saw three vehicles in the driveway and the front door to the home was open. A records check showed two of the vehicles were reported stolen.

About that time, a female subject walked out the front door and tried to flee from deputies back into the house. She was detained.

Deputies heard loud music and several voices coming from inside and called for backup. Once additional deputies arrived on scene, announcements were made by deputies in an attempt to have the subjects leave the home.

A safety sweep was made of the residence, and no one was found inside. Deputies saw two people inside a silver vehicle once law enforcement personnel made their way to the back of property.

Eric Scott Powell, 31, of Flagstaff, was identified and a records search revealed he had active warrants. Powell was searched, and deputies reported Powell was in possession of methamphetamine and a syringe.

A shed on the property was searched and four individuals were found inside. Records checks on the four were conducted, and it was discovered that Codi Morgan Damore, 48, of Kingman, and Michael Scott Bartmus, 40, of Kingport, Tennessee had active arrest warrants.

Deputies reported Damore was in possession of the keys for one of the vehicles. Searches of the vehicles and residence located multiple items of drug paraphernalia and marijuana.

Damore was arrested for theft of means of transportation, a felony, and two active arrest warrants.

All three were taken to Mohave County jail without incident. 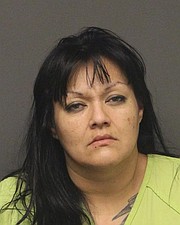 Sundance Baldwin-Bravo, 36 of Kingman was arrested after allegedly giving deputies a false name and having methamphetamine and marijuana.

Mohave County Sheriff’s Office deputies observed a white truck with a broken tail light on Dec. 11 at approximately 8:40 p.m. A traffic stop was conducted and deputies made contact with the male driver and a female passenger, who was later identified as Baldwin-Bravo.

Deputies knew Baldwin-Bravo from previous incidents and knew her to have active warrants. Baldwin-Bravo advised deputies several times they were wrong and gave them a false name.

Sundance Baldwin-Bravo was arrested and booked into Mohave County Jail without incident.

Corey Elizabeth Baldwin, 36 of Kingman and Fred Gaines, 66 of Kingman were arrested at approximately 4 a.m. on Dec. 13 for alleged drug violation.

Mohave County Sheriff’s Office deputies were dispatched to a residence in the 2300 block of Northfield Avenue after a male reporting parting advised a female was “freaking out.”

Deputies arrived on scene and knocked on the door, and a male subject advised the deputy to come in.

Once inside, deputies observed a male and female subject. Deputies asked if everything was alright, the female subject was incoherent and mumbled.

When the female subject looked at the deputy he observed her eyes to be extremely dilated, and she allegedly had fresh injection marks on her arms. Deputies observed the male subject was acting erratically and had a hard time sitting still.

Both subjects were arrested and booked into Mohave County Jail without incident. 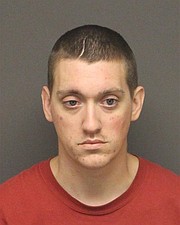 Eric Thomas Patterson, 29 of Bullhead City was arrested for allegedly stealing $1,400 in merchandise.

Mohave County Sheriff’s Office deputies responded to a business located in the 5200 block of Highway 95 on Dec. 2 in reference to a shoplifting that occurred on Nov. 25.

Loss prevention staff advised deputies that a male subject, identified as Patterson, and an unknown male subject had entered the store on Nov. 25.

Staff had advised deputies that the subjects had allegedly stole approximately $1,400 worth of merchandise and exited the store through a fire exit.

The video given to deputies by loss prevention staff support the statements given and Patterson was observed on video surveillance placing several items into a showpping cart, leaving the store through an unauthorized door, and loading the items into a truck and leaving the property.

On Dec. 15 deputies contacted Patterson at his residence in the 300 block of Meander Drive in Bullhead City and he was taken into custody.

When asked, Patterson advised deputies he allegedly did not remember the incident.

Eric Thomas Patterson was arrested and booked into Mohave County Jail without incident. 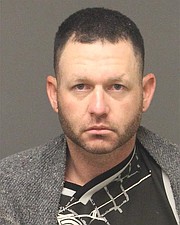 Daniel Lee Williams Jr., 33 of Fort Mohave was arrested Thursday at approximately 4:30 p.m. after allegedly attempting to pawn a pair of golf clubs he found in a vehicle he allegedly stole.

Mohave County Sheriff’s Office deputies responded to a business in the 4700 block of Highway 95 in reference to a disturbance. The reporting party advised that there was a dispute in the parking lot over a vehicle and a male subject had pulled a handgun on another subject.

Upon arrival, deputies observed approximately seven subjects involved in the disturbance and removed the weapon from the male subject.

Williams reportedly entered the pawn shop and attempted to pawn a pair of golf clubs, but was denied.

When he left the sore and went back to the vehicle he was driving, he was confronted by the male subject with the weapon.

During the investigation, it was determined that the vehicle was reported stolen out of Bullhead City and the male subject with the weapon, recognized the stolen vehicle and attempted to stop Williams from leaving the parking lot.

A records check revealed Williams also had an active arrest warrant. He was arrested for theft of means of transportation, trafficking stolen property, both felonies. Williams was booked into Mohave County Jail without incident.