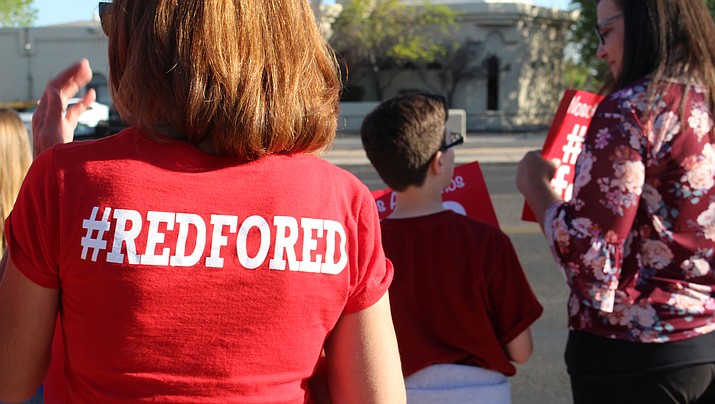 Thousands of Arizona teachers, including those at Kingman Unified School District, took to the streets this spring to protest low teacher pay and lack of school support. Educators across the state are hoping it was the beginning of a movement. (Daily Miner file photo)

WASHINGTON – A record 1,800 teachers were on ballots across the country this fall, and the National Education Association estimates that as many as 1,100 of them won their races.

Not a perfect score, but good enough for educators to boast that what they have been calling the Year of the Teacher could be just the first of many such years.

“Educators stepped out of their classrooms and into the public realm to run for the legislature and they did it fearlessly, and they did it in a way that made all us proud of them,” said Joe Thomas, Arizona Education Association president.

Many point to movements in Arizona and other states that saw teachers walk off the job or – in Arizona’s “Red for Ed” movement, take to the streets by the thousands – to protest low teacher pay and what they saw as a lack of school resources.

Carrie Pugh, national political director for the National Education Association, said it was movements like “Red for Ed” that motivated teachers to get on the ballot in the first place.

“There was a lot of organic, first-time activism at so many levels that we saw across the country,” Pugh said.

The most high-profile teacher candidate in Arizona probably was David Garcia, a Democrat and Arizona State University education professor. Garcia, a Democrat who narrowly lost a 2014 election for state superintendent of education, ran this year for governor but was not able to unseat incumbent Republican Gov. Doug Ducey. Still, Garcia was upbeat about the number of teachers who got involved this year.

“What is powerful is the number of rank-and-file teachers who are getting involved politically,” he said. “That’s the energy – it is the thousands of teachers that are paying attention politically today – that is going to move the needle.”

That level of participation is what’s important, advocates say, even if that didn’t produce a sweep at the polls.

State Rep. Reginald Bolding, D-Laveen, knows that you can’t win them all. Bolding, who was re-elected this year to his District 27 legislative seat, lost his first bid for office.

“Most elected officials in office, they didn’t win their first races either,” he said. “I even think about myself, my first race that I ran in 2012. I wasn’t successful, and you can go on down the line to a number of elected officials.”

Garcia said the passion that drove teachers to hit the streets and to put their names on the ballot did not end with this fall’s elections.

“Any teacher who decides to run and put their name on the ballot, or any educator, they can’t do it alone, they’re going to do it with the support of many others,” he said. “And in this case. I believe that the big change is the number of politically active and politically aware teachers now.”

Pugh said the movement did more than get teachers on the ballot. It made voters aware of school issues and turned education into what she called “a kitchen-table topic” around the state.

“What you saw in the walkouts this past spring in that state, I think it absolutely put education on the ballot and I think that it also made races that may have not been competitive, competitive,” she said.

Thomas said it’s a change that he expects will continue.

“Win or lose, they were part of a movement that lifted educators up,” Thomas said.