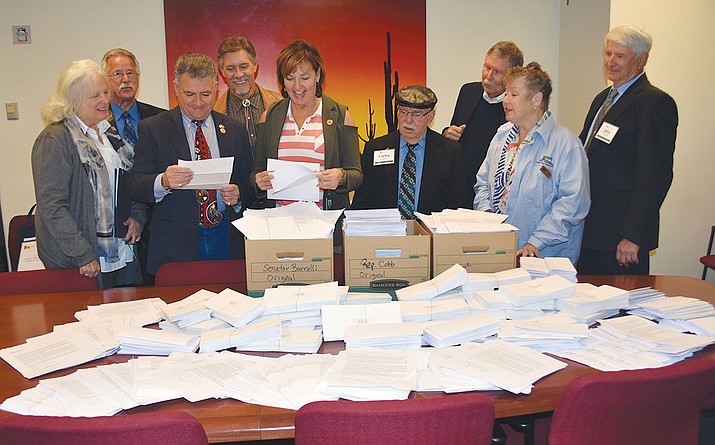 The rally held great significance this year with the culmination of efforts by MEC to protect assigned capital credits from the Arizona Department of Revenue, a campaign that started at the coop’s meeting in June.

“Sonny and Regina have been there since we first brought legislation to the floor to protect capital credits from the ADOR, who would like to escheat this money for Maricopa County and the rest of the state,” Carlson said.

“Those two truly understand that the funds in question are not only assigned to the cooperative by our members, but are also crucial to our community through the many programs these funds support, as well as through important infrastructure upgrades that assigned capital credits help finance.”

MEC sets its rates to cover the cost of doing business, not to generate a profit. Money received from the sale of electricity is used to pay operating expenses, pay loans and set up an emergency reserve fund.

Any remaining margin is allocated to a capital credit account for every member based on the amount of electricity purchased. Capital credits reduce the need to borrow money and pay interest on the loan.

Borrelli was a strong supporter of the legislation and co-sponsored Senate Bill 1129 last year to protect assigned capital credits.

After it was introduced, the bill sailed to a 30-0 vote in the senate. However, following a long committee battle, Borrelli and Cobb were disappointed to see their efforts fail by just one vote.

That call to action gathered a lot of steam over the past few months and brought in more than 6,600 letters addressed to Borrelli, Cobb, and District 5 Rep. Paul Mosley.

Several boxes of letters were taken to the Legislature rally by Carlson, MEC board members and statewide cooperative representatives in a show of support for assigned capital credits and their importance to cooperatives and the communities they serve.

“The efforts by Mohave Electric and their members are very impressive and will send a real message to lawmakers here in Phoenix,” Borrelli said. “These letter writers are not just MEC members. They are Arizona residents who are active in their communities and want to see their cooperative’s money stay in their communities, where it does the most good.”

Added Cobb: “We’re going to go and hit it hard again this session and hopefully get it across the finish line. Even though I am not a cooperative member, I hear the voices of those members we represent, and hear them loud and clear through their actions. Those I talk to want their coop’s money kept local, and feel if the money goes to the state, there is little chance it will return to their community.”