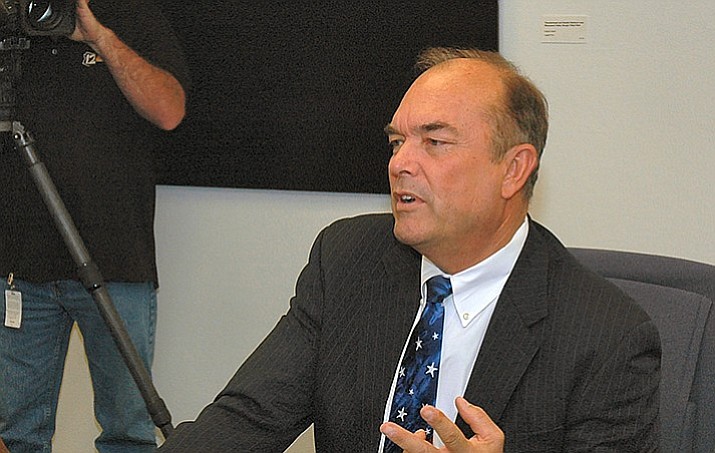 But on Thursday, he was kicked out of the Arizona Legislature for a lengthy pattern of sexual misconduct.

The whispered rumors about the retired and married Yuma farmer were brushed off as the actions of a country bumpkin jokester until October when the #MeToo movement prompted millions of women to share their experiences with sexual harassment or assault on social media.

Rep. Michelle Ugenti-Rita then publicly accused Shooter, fellow Republican, of propositioning her for sex years ago and repeatedly commenting on her breasts.

Spurred by the movement that erupted after a New York Times expose about movie mogul Harvey Weinstein, other women came forward against Shooter at a dizzying pace — lobbyists, a newspaper publisher and other female lawmakers.

"This all began years ago when Mr. Shooter began making inappropriate comments and gestures to people and culminated today," Republican House Speaker J.D. Mesnard said after Shooter was booted out of office on a 56-3 vote. "Certainly the #MeToo movement and the greater awareness not only here but nationally over issues of sexual harassment and other similar offenses brought this to the forefront."

Other lawmakers facing similar allegations across the nation were stripped of leadership posts, resigned or announced they would not seek re-election.

A defiant Shooter did neither, although he was stripped of his committee leadership post.

Shooter was a powerful figure as the chairman of the Senate Appropriations Committee for years before taking up the same role when he moved to the House in 2017. He spent many nights during the session being wined and dined by lobbyists at top-notch restaurants.

On the final night of the annual legislative session his office became a virtual bar as the liquor flowed freely and he donned a serape and sombrero or other costumes.

Mesnard had ordered an investigation in early November after Shooter had charged his initial accuser, Ugenti-Rita, with having an inappropriate relationship with a staffer and making crude comments herself. Slowly, over time, he apologized for what he called his "jarring, insensitive and demeaning" comments but argued that he never sought to touch anyone or have a sexual relationship with them.

The investigative report released Tuesday essentially cleared Ugenti-Rita but found Shooter had engaged in "repeated pervasive conduct (that) created a hostile work environment for his colleagues and those with business before the Legislature."

Mesnard recommended a formal censure, a step short of expulsion that is essentially a public shaming by vote of the House.

But hours before Thursday's scheduled censure debate, Shooter sent a letter accusing the investigators of whitewashing an allegation by a woman against another lawmaker that he claimed was far worse than his actions.

"I'm a big boy, I'm in the ring, you take your lick," he told The Associated Press "But that little girl, if she gets hurt because she did the right thing and so far she got kicked right in the teeth for doing the right thing, it ain't right."

Mesnard saw it as "nothing more than an effort to use this individual as a pawn," and called for an immediate expulsion vote, saying he had talked to the woman and she rejected Shooter's contentions.

"So he was not in fact standing up for the victim but rather further victimizing this person," Mesnard said.

Mesnard also asked Shooter to turn over for any weapons he had with him. Mesnard said Shooter turned over a handgun.

As the House began a historic vote to expel a sitting lawmaker — the first in Arizona's Legislature in nearly three decades — Ugenti-Rita and women from both parties gathered in a circle, holding hands and hugging.

Shooter spoke first, voting against the measure and saying that while he had said and done stupid things, "I stood on the carpet, I took it like a man, I apologized."

"I have faithfully executed my duties," he said. "I've never taken bribes, I've never considered one way or another except on the merits of a bill."

He then dropped his microphone, leaving the chamber. Within about an hour, his expulsion was final. Another Republican will be appointed to fill out the remaining 11 months of his term.