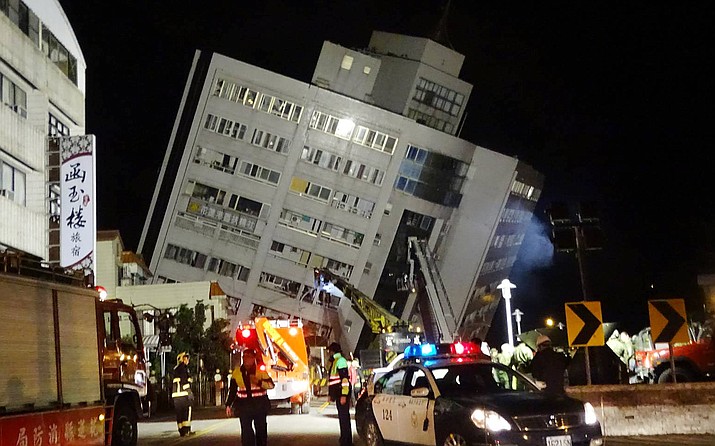 The Central News Agency reported that the ground floor of the Marshal Hotel in Hualien county had caved in, causing the deaths of the two employees.

Other buildings were shifted on foundations and rescuers used ladders, ropes and cranes to get residents to safety.

The U.S. Geological Survey said the quake struck late Tuesday about 21 kilometers (13 miles) northeast of Hualien, on the island's east coast. It occurred at a depth of about 9.5 kilometers (6 miles).

The earthquake followed one over the weekend off the coast of Hualien, which lies along the famed "Pacific Rim of Fire" known for seismic activity from Alaska to Southeast Asia.

The quake came exactly two years after a magnitude-6.4 quake struck southern Taiwan, causing the collapse of an apartment complex and the deaths of 115 people.

Five people involved in the construction of the complex were later found guilty of negligence and given prison sentences.

Earthquakes rattle Taiwan frequently. Most are minor and cause little or no damage.