Hunting meteorites: Prescott man one of the world’s best 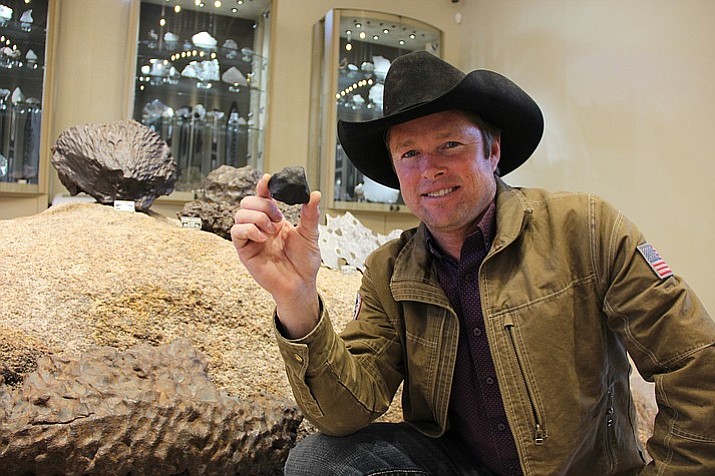 Local meteorite hunter Robert Ward shows off the most recent addition to his collection, a meteorite he found atop the frozen lake near Hamburg, Michigan.

It’s no wonder that Prescott resident Robert Ward is so often referred to as a “space cowboy.”

On a recent afternoon at his home – tucked among the 1.4 billion-year-old formations of the Granite Dells – Ward looked the part: polished black leather boots, black cowboy hat, crisp collared shirt, tan cargo jacket and jeans. And all around him, neatly displayed in well-lit glass cases, were the meteorites that he has found, bartered for or purchased throughout the world.

“That’s the oldest single thing known to man,” Ward said, pointing at a smaller specimen in the collection that he hunted down in California in 2012.

Within that meteorite are small white dots, known as calcium-aluminum-rich inclusions (CAI).

“Those are actually from a star that went supernova in our region of space that pre-dated our star,” Ward, 41, said. “CAIs are six, eight billion years old. It’s what we call the first nebular epoch.”

Other specimens on display at his home include debris blown into space from Mars and bits of near-Earth asteroids that made their way to Earth’s surface.

Ward made the most recent additions to his collection this month, when a meteorite was widely witnessed as it fell from the sky in Michigan.

Using seismic data, witness reports, and imaging from the Doppler Weather Radar, Ward – who has been hunting and collecting meteorites for 28 years – along with a team of other meteorite hunters were able to pinpoint with great accuracy where some of those meteor fragments had landed: a frozen lake bed near Detroit.

Within 15 minutes of reaching the lake, Ward found the first of the three meteorites he collected during that trip.

To make such finds even easier, Mike Hankey, operations manager for the American Meteor Society, is working to establish an all-sky monitoring network, using a six-camera system he developed.

“We essentially want 500 of them to go across the entire country, so that wherever a fireball falls, we’ll know exactly where it is, how big it was, how fast it was going, with no uncertainty,” Hankey said.

Ward has worked closely with Hankey on the camera project and eagerly agreed to have the first of the new camera systems installed last July next to his home. Several other cameras have since been installed throughout the U.S. including two that went active last weekend in Tucson and Florence, Arizona.

With these recent installations, any sky event that occurs between Prescott and Tucson will now be captured by at least two cameras, which is required to triangulate the event’s location.

“You can take the angles and figure out exactly where it is,” Hankey said.

While Hankey initially started working on this project to improve the scientific community’s ability to track fireballs — the term for a very bright meteor — he said the camera system will provide high-definition imaging for anything that occurs in the sky, such as weather phenomena, aviation events or rocket reentries.

“Just in the past few years, we’ve really nailed this down to a science,” Ward said. “But getting a nationwide camera network up is the final step in really dialing things in to be as exact of a science as it can be.”