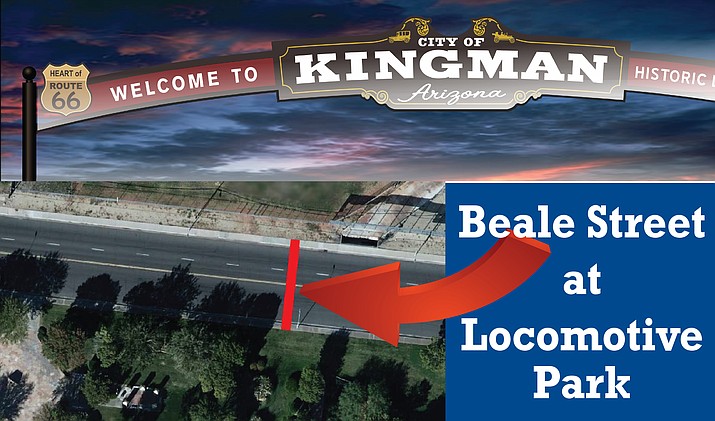 The Beale Street Gateway Arch will be located near the Locomotive Park on West Beale Street.

KINGMAN – City Council took the next step in the construction of the Beale Street Gateway Arch by approving the construction contract with YESCO LLC at a Council meeting Feb. 6 by a vote of 6-1.

“I believe this is a luxury and not a necessity,” said Councilwoman Vickie Kress, the lone dissenting vote.

In addition to approving the contract at a guaranteed maximum price of $177,736, the action authorized the transfer of $90,000 of capital project fund contingency for the arch construction. Interim City Manager Jim Bacon explained that in this case the capital project fund is a reference to bed tax dollars. Bed tax dollars are to be used for the archway project, and in general, projects which benefit tourism.

“The technical accountants in the staff chose to call it the capital project fund contingency, but those dollars are in fact bed tax dollars,” he explained.

The capital project fund contingency receives money from multiple funds, including the general fund, water fund and bed tax. However, Bacon said that all that remains in the contingency fund are bed tax dollars, as all the money from other funds has been allocated to other projects.

The Kingman Chamber of Commerce has also donated about $35,000 for the project.

“I think tonight we have discussed tourism as a key strategy in our economic development department’s plan, and I really think looking at the sign it is a place-making sign,” said Vice Mayor Jen Miles. “And it would invite people to come down to Beale Street, which by the way is an economic driver for this city. We get a lot of sales tax money from the businesses, the entrepreneurial, small businesses that are thriving now on Beale Street.”

Citizen comment in regards to having the project constructed by a local contractor prompted Mayor Monica Gates to inquire as to YESCO’s location, asking if the corporation still had an office in Kingman.

Greg Henry, director of Kingman’s engineering department, explained that YESCO no longer has an office in Kingman. Their main office is in Las Vegas, though the project manager for the archway is located in Bullhead City.

Councilwoman Jamie Scott Stehly asked Henry about the feasibility of contracting a local company to do the project. Henry said that to do so, Kingman would have to restart the process of hiring a construction manager at risk, which began in fall 2016.

Though, Henry has in the past few weeks reached out to local engineering firms to discuss the city’s needs.

“If we were going to terminate whatever we have to date with YESCO we’d have to start all over,” Henry said.

The final archway is slotted to be constructed in proximity of the Locomotive Park on W. Beale Street, and will now include lighting and the phrase, “Heart of Route 66.” The contract states that the project will be completed by June 30.

Welcoming downtown arch inches toward reality
The Beale Street arch has lost some luster
7 things to know for the Feb. 6 City Council meeting
Community View | Route 66 Gateway Arch: It’s not rocket science, just get it done
Supporters for a downtown arch are pressing forward wanting to welcome visitors. But at what cost?