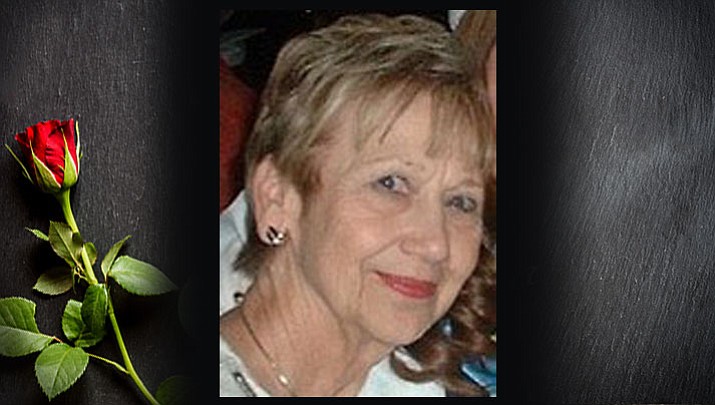 Shirley E. Carlin passed away peacefully in Scottsdale on Feb. 11, 2017 at the age of 82 and is now eternally joined with her husband Patrick.

Shirley was born Oct. 21, 1935 in Shenandoah Iowa. At an early age her family moved to Phoenix where she attend North High School and later attended Phoenix College. Shirley spent three years traveling the world as a stewardess for TWA. Soon after she married her husband of 56 years, Patrick, and started a family. While raising her children she worked part time for HallCraft Homes of Arizona. She moved to Kingman in 1970 where she went to work for Valley National Bank as a Loan Officer until she retired. She was a long-time member of St. Mary’s Catholic Church. Shirley enjoyed staying active with her friends, Soroptimist and other clubs. One of her greatest loves was shopping for and spending time with her beloved grandchildren.

Known as a devoted wife, mother and grandmother, she was loved by many. Shirley was proceeded in death by her husband Patrick.

She is survived by her brother Francis, her sons Patrick and Greg, grandchildren Lindley, Andrew and Shane. Andrew’s mother Michelle Bonito and Lindy and Shane’s mother Diane Smith.

At this time, the family is honoring her life privately.

In lieu of any flowers or cards the family would prefer donations be made the Alzheimer’s Association or Hospice of the Valley in her name.