Greinke will get help from humidor in third year with Arizona 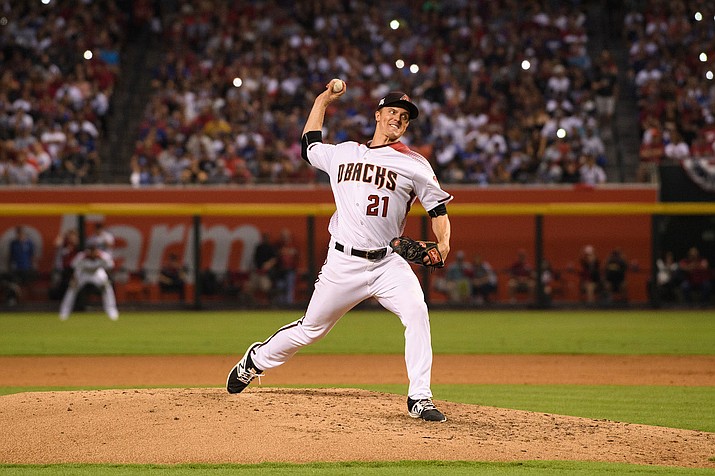 Zack Greinke, entering his 15th major league season, was 13-1 at home last season with a 2.87 ERA. Greinke will throw home games this year with baseballs that have been stored in a humidor.

SCOTTSDALE (AP) — Zack Greinke is beginning his third season with the Arizona Diamondbacks, and this time the right-hander will be throwing home games with baseballs that have been stored in a humidor.

The idea is to offset the extreme dry air of the desert and make Chase Field a little less homer-friendly than it has been, and that has to be good news for pitchers (if not for hitters). The ever-cautious Greinke took a wait-and-see attitude.

"I don't know. I've got to see it," he said after throwing a spring training bullpen session on Thursday. "My thoughts are I wish every park was neutral so everyone dealt with the same circumstances then you wouldn't have to deal with any of that stuff."

Chase will join Denver's Coors Field as parks that use humidor-stored baseballs.

But he has noticed the difference, especially for a pitcher who depends on command, not power, to succeed.

"l know my ball moves more in most places than it does in Arizona," he said, "like my two-seamer and some of my change-up."

Greinke has been throwing on his own. He said this was his fifth bullpen session. The idea is to get off to a faster start this spring than he did a year ago.

"It ended up being a good year but I was playing catch-up a little bit too much," he said, "and if things didn't work out super-smooth the end of spring training I might have been a little more behind, where this year I'm trying to start early so I don't have to be lucky to get ready in time."

Against Colorado in the Wild Card Game, he gave up four runs on six hits in 3 2-3 innings. In the NLDS against the Los Angeles Dodgers, he went five innings, allowing three runs on four hits and walking five.

"I know the entire body of work last year for Zack was very successful," manager Torey Lovullo said. "He was our No. 1, a true ace. He was a stopper every fifth day. He went out there and gave us a chance to win games. People want to focus on the two postseason games. That's just the nature of the beast. Sometimes you win, sometimes you lose. He'll probably tell you it wasn't his best days but I don't think it had anything to do with wearing down."

The 34-year-old pitcher, entering his 15th major league season, is in the third year of the six-year, $206.5 million contract he signed with Arizona, a deal that uses up a big chunk of the team's payroll.

Greinke was the opening-day starter the past two seasons but perhaps not this year, with the emergence of left-hander Robbie Ray.

"Nothing is written in stone right now," Lovullo said. "We're going to see how this spring plays out. I know that you guys want that answer as soon as possible. I know that Clayton Kershaw is the starter for the Dodgers on opening day. I don't' want to go that far yet. I want to wait it out and see how these guys perform."