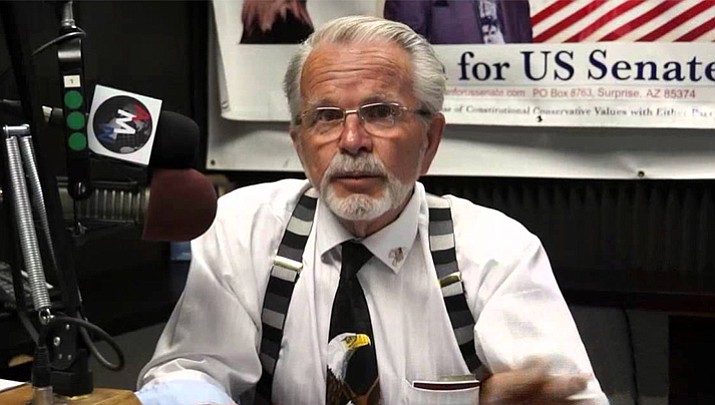 PHOENIX (AP) — A dozen Republicans are facing off in the special primary election to replace disgraced former U.S. Rep. Trent Franks, and voters may have a hard time distinguishing one from the other.

The top Republicans in the race for conservative 8th Congressional District include former state Sens. Steve Montenegro and Debbie Lesko, who both resigned to run for the open office. Also in the top tier are former state Rep. Phil Lovas, former state utility regulator Bob Stump and Clair Van Steenwyk, a former radio host who garnered nearly 29 percent of the vote against Franks in the 2016 GOP primary.

They will struggle to differentiate themselves in the conservative district.

The five GOP front-runners have participated in a series of debates in recent weeks, but few policy differences emerged. All back Trump, all tout their conservative credentials and all want tighter border security and more immigration enforcement.

"I love it as a political science experiment — have a sprint election where no one has time to raise significant resources to connect or communicate with voters," longtime Republican political consultant Stan Barnes said. "I'm not sure it's the best way to do things, but this is the system we have."

Barnes said the race will favor those "with built-in constituencies and name identification."

Franks resigned Dec. 8 after acknowledging he had discussed surrogacy with two female staffers. A former aide told The Associated Press that he pressed her to carry his child and offered her $5 million to be a surrogate. The resignation triggered a special election.

Each of the candidates is going their own way to try to convince voters they're the best choice.

Montenegro, who was Franks' district director, touts backing from his former boss. Lovas points to his close ties to the president, noting that he chaired Trump's Arizona campaign effort and that Lesko, Montenegro and Stump didn't support him early.

Lesko is relying on her state Senate credentials, noting that she pushed through complicated legislation to revamp state police and fire pensions that saved taxpayers $500 million.

Stump is relying on his background as a state House member and his two terms on the Arizona Corporation Commission, the state utility regulation board. He said during a debate that only he has the expertise to help modernize and protect the nation's electric grid from an outside attack.

Stump has been caught up in a controversy over his first name, accused of changing it from Christopher to Bob to piggyback on the recognition of a longtime Arizona congressman with the same name who retired in 2002. Stump counters that he's used Bob in all his elections.

Van Steenwyk is running on his outsider status, touting his business experience and highlighting his lack of backing by the Republican Party.

The Democratic candidates are Dr. Hiral Tipirneni and Brianna Westbrook. Tipirneni is an emergency-room physician and first-time candidate. Westbrook became involved in politics several years ago as a transgender woman who argued for a Phoenix policy that would protect the LGBTQ community from discrimination.

Both support Medicare for all and affordable or free college.