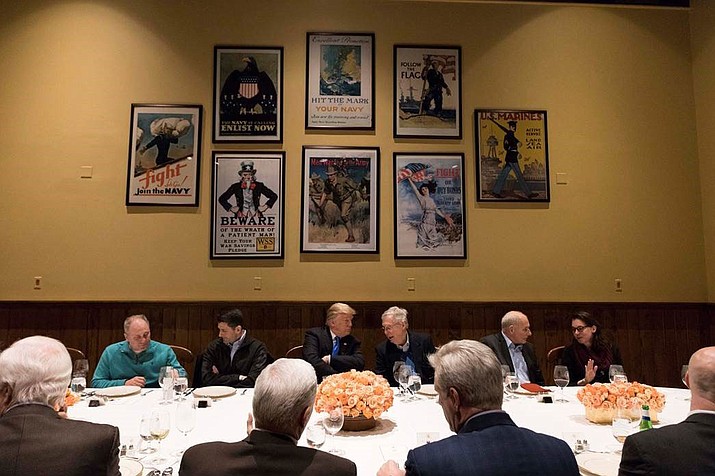 WASHINGTON (AP) — As badly as things have gone for immigration legislation in the Senate, it's not looking any easier in the more conservative House.

Republican leaders there are scrambling to find enough GOP votes to pass a measure that's even more restrictive than a proposal by President Donald Trump that flopped spectacularly in the Senate on Thursday. Compounding those divisions are pressures from some of the House's most conservative members, who are casting the effort as a pivotal test for Speaker Paul Ryan, R-Wis.

"It is a, the, defining moment for this speaker," said Rep. Mark Meadows, R-N.C. who leads the hard-right House Freedom Caucus, which helped force former Speaker John Boehner from his job in 2015. "If he gets it wrong, it will have consequences for him but it will also have consequences for the rest of the Republican Party."

Ryan aides did not respond to a request for comment on Meadows' remark. But underscoring party rifts, some Republicans defended the speaker and his work on the issue.

"Any time you allow one member or a small group of members to dictate overall policy for the country, it is an unfair scenario," Rep. Jeff Denham, R-Calif., who's opposing the conservative legislation, said Friday. "I just don't think our speaker's going to give into any type of threats."

Even if House leaders manage to push the measure through their chamber, it would be dead on arrival in the closely divided Senate. Democrats there could ensure its demise because any immigration measure would need 60 votes to survive, meaning bipartisan agreement is mandatory.

All of that underscores how unlikely it is that Congress will approve sweeping election-year legislation on the subject, including something to help young "Dreamer" immigrants stay in the U.S.

The measure would provide only temporary protections for Dreamers, young immigrants brought to the U.S. illegally as children who still lack permanent authority to live in this country. Trump offered a chance for citizenship for 1.8 million of them.

The bill would provide money for the border wall with Mexico that Trump wants. And like Trump's plan, it would limit the relatives that legal immigrants could sponsor for citizenship and end a lottery that distributes visas to people from diverse countries.

But it goes further.

It reduces legal immigration by about 25 percent annually and requires employers to use the online E-Verify program to validate that their workers are legal. It withholds federal grants from "sanctuary cities" that don't help federal agents catch immigrants in the U.S. illegally and would make it easier to deport immigrants in the country illegally who are gang members or have been arrested repeatedly for drunk driving.

House Democrats uniformly oppose the proposal. So to succeed Republicans must supply 216 votes — a simple majority in a chamber with four vacant seats.

The bill has been embraced by the White House, but GOP leaders are encountering opposition from suburban moderates who consider the bill too harsh and whose voters could punish them in this fall's elections. In addition, Republicans from districts that rely on seasonal foreign agriculture or tourism workers say its visa standards are too restrictive, while some conservatives say it's too lenient and shouldn't help Dreamers.

"That bill is a dead man walking," said Rep. Carlos Curbelo, R-Fla., who predicted its defeat should a vote occur. "It's designed to appease fringe elements in our society," he said, citing its failure to establish a citizenship process for Dreamers and other restrictions.

GOP leaders have said they'll hold a roll call once the measure has enough votes to pass, and haven't ruled out making changes to win support. The earliest possible vote would be after Congress returns from next week's recess.

Meadows said Friday that despite the Senate's stalemate over immigration, "It is critically important that we demonstrate a conservative solution" that protects Dreamers from deportation. He said he believed that Trump's support for immigration legislation would eventually result in "more concessions" from senators.

There are other House immigration bills, including a compromise measure by Reps. Will Hurd, R-Texas, and Pete Aguilar, D-Calif., that resembles one measure the Senate rejected Thursday. Ryan is considered unlikely to bring immigration legislation to the floor not backed by most Republicans.

One possible fallback is temporarily extending Dreamers' protections for a year in exchange for some money for border security.

"I think we'll address the issue at some point in some way," Senate Majority Leader Mitch McConnell, R-Ky., told a reporter Friday when asked about the possibility of such a temporary extension.

Dreamers, brought to the U.S. illegally as children, have temporary protection under the Obama-era Deferred Action for Childhood Arrivals program, or DACA. Trump said in September he's ending the program but gave Congress until March 5 to revive it, though federal courts have temporarily required him to continue its protections.