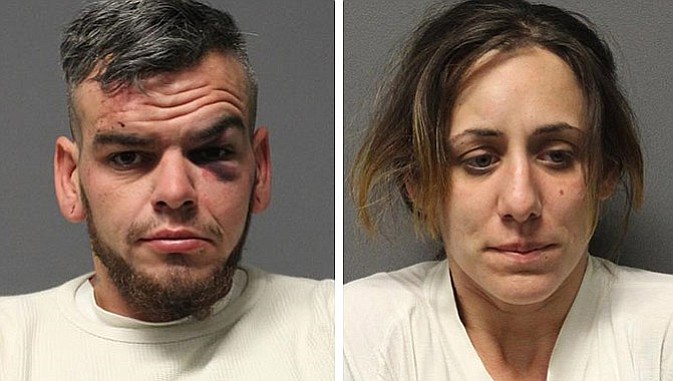 Stephen Garcia, 31, and Darlene Clapperton, 24, were arrested in connection with a fight in Ash Fork on Friday, Feb. 16. (YSCO)

ASH FORK, Arizona — Yavapai County Sheriff’s deputies have booked two suspects into the Yavapai County jail, one of whom is charged with attempted homicide among other charges, according to YCSO Spokesperson Dwight D’Evelyn.

Deputies were dispatched to a report of several people fighting at 6:15 p.m. Friday, Feb. 16, on Fourth Street in Ash Fork, and were told one person had been hit in the head with a baseball bat, D’Evelyn said. Another caller reported hearing a gunshot that was later determined to be the sound of the baseball bat as it struck the victim’s head.

Two suspects – Stephen Garcia, 31, and Darlene Clapperton, 24 – were eventually identified and initial information indicated Garcia got into a verbal argument with a woman outside Oasis Bar on Park Avenue and threatened to assault her. The victim called out for help and her boyfriend and his friend approached to intervene, the YCSO reported Saturday.

Garcia went home and returned with the baseball bat and his girlfriend, Clapperton. He allegedly hit the woman’s boyfriend in the head and knocked him unconscious, D’Evelyn said. Another man was bitten in the face by Garcia when he attempted to take the bat away.

Garcia was found hiding in a convenience store bathroom and Clapperton was arrested at her house on Fourth Street. Deputies had to restrain Garcia’s legs while being arrested, D’Evelyn said, adding that Garcia spit on deputies and kicked one trying to control his legs.

Clapperton’s charges include assault and aggravated assault on a law enforcement officer.

The cause of the original confrontation has not yet been disclosed.

PHOENIX (AP) – Phoenix police say an officer shot and wounded a man who pointed a gun at officers as they attempted to arrest another man sought on domestic violence charges and a felony warrant.

Pfohl says a gun was recovered at the shooting scene and that the 28-year-old wanted man ran off but was located in a nearby yard and arrested.

No identities were released.

According to Pfohl, the shooting occurred after officers spotted a vehicle belonging to the wanted man.

No officers were wounded.