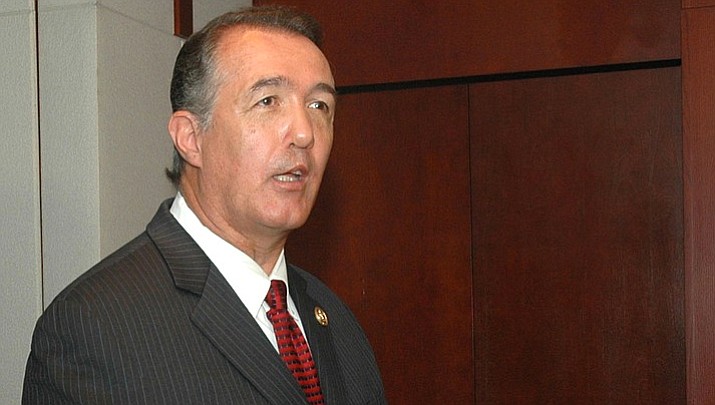 PHOENIX (AP) – The closing days of the Republican primary to replace an Arizona congressman who quit in a sex scandal have included a top contender admitting he received texts from a Senate aide posing topless, and a second favorite fighting claims of campaign funding improprieties.

It remains to be seen what the impact may have on Tuesday's contest to replace Rep. Trent Franks because the state relies heavily on mail-in ballots completed before the revelations surfaced.

The 8th Congressional District covers much of the western Phoenix suburbs, where a Democrat has not been elected in more than 35 years. A dozen candidates are running in the Republican primary, including two former state senators, two former state House members and a talk radio host who got 29 percent of the vote in the 2016 primary against Franks.

Two Democrats are seeking their party's nomination, hoping for a longshot win in the April 27 general election.

Franks, who held the seat since 2003, resigned in December after acknowledging he had discussed surrogacy with two female staffers. A former aide told The Associated Press that he pressed her to carry his child as a surrogate and offered her $5 million.

Many observers believe the favorites in the GOP race are former state Sen. Steve Montenegro, a Tea Party favorite backed by Franks, and former state Sen. Debbie Lesko, who has the support of popular former Gov. Jan Brewer.

Montenegro, a married father and Christian minister who was Franks' district director, admitted last week that reports about the texts between him and a former Senate aide were true. He said he became too close to the woman and that while she sent an unsolicited topless photo, he "never had inappropriate relationship with her or anyone else."

The staffer's attorney said Montenegro had "groomed" her for months and that they discussed various sexual matters.

Meanwhile, former state Sen. Debbie Lesko is denying charges by Montenegro and others that her transfer of $50,000 from her state campaign committee for the primary contest was illegal. Lesko was one of the drivers of the state's landmark school voucher program and is touting her border security plan.

Another primary candidate, former state House member Phil Lovas, has filed complaints with federal election officials and the state attorney general alleging Lesko's cash transfers were illegal. Lovas boasts of his early support for President Donald Trump, although the president has not made an endorsement in the race. He stepped down from his state House seat last year after he was appointed to a Small Business Administration post in the Trump administration.

"If someone were to pick up and surprisingly win this thing I would think it would be Lovas, of anybody, but I think it really does come down to Montenegro versus Lesko," said Paul Bentz, a researcher and strategist at the Phoenix-based political consulting firm High Ground. "It would appear that they're all chasing Lesko."

Bentz said Brewer's support for Lesko could make the difference. "This is her district, this is where she lives. So having her not only endorse Lesko, but also weigh into this Montenegro issue has played a pretty critical role there."

The Democrats are political newcomers Dr. Hiral Tipirneni and Brianna Westbrook. Tipirneni is an emergency-room physician who is backed by former U.S. Rep. Gabby Giffords. Westbrook became involved in politics several years ago as a transgender woman who argued for a Phoenix policy that would protect the LGBTQ community from discrimination. Both support expanding Medicare to cover more people and affordable or free college.

Experts say either Democrat will have a daunting task in the general election, even if Montenegro wins and continues to be dogged by the sex-talk scandal.

"I know there's some talk and some folks who think there's going to be a big push among Democrats to win this race," Bentz said. "But it would take a Herculean effort for a Democrat to win."