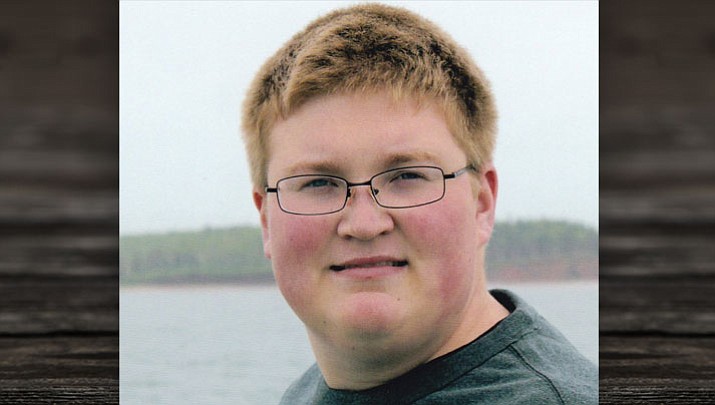 Charles (Charlie) David St. Clair II, age 20, passed away in Las Vegas, Clark County, Nevada, at Summerlin Hospital on Dec. 31, 2017 from complication with Leukemia, with his family by his side. Charlie was born on June 7, 1997 in Gainesville, Alachua, Florida.

Charlie attended school in Pittsford, Michigan, Owens Elementary in Wikieup, Arizona, and Kingman Academy of Learning, in Kingman, Arizona. He graduated from Kingman Academy of Learning (KAOL) in 2015. Since that time he has been attending Northern Arizona University, in Flagstaff, Arizona. Charlie, consistently every year, obtained his school’s honor roll and/or its Dean’s List.

When Charlie was 12 years old he went to New Zealand and Australia as an ambassador with the People to People Ambassador Program. Charlie traveled to five different countries and 47 states. Charlie loved to read and study military and political history. While attending Kingman Academy he participated in the Academic Decathlon, in which he received numerous awards and medals in his regional, state, and national competitions. Charlie was a member of the National Honors Society, and he also participated with Future Business Leaders of America (FBLA) both in high school and at the college level. He qualified for and attended national competitions in Chicago, Nashville, and Atlanta. In Atlanta, Charlie placed first in the nation for Justice Administration. The Governor of Arizona presented Charlie with the State Certificate of Commendation, for his success in representing Arizona in his first-place showing in PBLA/FBLA national competition in Atlanta. Charlie also was a member of the Boy Scouts of America; he earned all Cub Scout Badges including the Arrow of Light. In Boy Scouts he earned the rank of Eagle Scout with Palms. He also earned the On My Honor Medal while in scouting. Charlie was a lifelong member of the Church of Jesus Christ of Latter Day Saints, and was attending the Golden Valley Branch. He earned his Duty to God Award, attended and graduated from the Seminary Program receiving his diploma from the Church Education System signed by the Prophet.

Charlie is survived by his parents John Jr. and Amelia St. Clair, in Golden Valley, Arizona, a brother in Michigan, John St. Clair III, and a sister, Pence Anna St. Clair, in Golden Valley, Arizona. He was preceded in death by his grandfather John St. Clair Sr. Charles is also survived by grandparents Marguerite St. Clai of Pittsford, Michigan, and Thomas and Nettie Dunne, of Galesburg, Illinois. He has numerous uncles, aunts, and cousins, in many states.

Services for Charlie will be at 1 p.m. Thursday, Jan. 4, in Kingman, Arizona, at the LDS Chapel on Rutherford Street. Ty Burnside will be presiding over the Kingman services. After which, Charlie will be transported to Michigan and for services there, presided over by John Coakley, at the Jonesville LDS Chapel at noon Tuesday, Jan. 9. Interment will follow at the Evergreen Cemetery, in Waldron, Michigan.

Charlie’s family would like thank all the doctors, nurses and other health care providers at Children Specialty Centers of Nevada, Sunrise and Summerlin Hospitals in Las Vegas, Nevada. The family requests that instead of flowers, donations be given to the Candlelighters Foundation of Las Vegas, Nevada.