Supporters for a downtown arch are pressing forward wanting to welcome visitors. But at what cost? 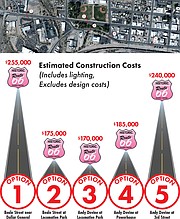 KINGMAN – Barb Charon loves the idea of a gateway arch entering historic downtown Kingman where she owns The Farmhouse vintage décor shop, similar to the arches she sees in Williams and Flagstaff.

If she had a choice, Charon would build the arch where Beale Street and Route 66 split at Locomotive Park. There’s a dilapidated old “K” made of tires and railroad ties welcoming people to town now.

“Every small town has a gateway,” Charon said. “I’d like to see more done with Locomotive Park and put the arch somewhere down there, like on Beale Street or Route 66, mainly because of visibility.”

City Council is considering five options for the arch location, each with a different price tag and pros and cons.

The cheapest option would be to put it across Andy Devine Avenue at Locomotive Park at a cost of $170,000, not including design work, City Engineer Greg Henry said at Tuesday’s City Council work session.

It would span three lanes on historic Route 66, but there’s a curve in the road that would impede visibility.

The most expensive option is on Beale Street coming off Interstate 40 around the Dollar General store. That’s $255,000 because it goes over five lanes and runs into utility conflicts, Henry said. It’s also under jurisdiction of Arizona Department of Transportation.

The City is currently under contract with YESCO, sign company, to build the arch on Beale Street, between Locomotive Park and Lee Williams High School, budgeted at $135,000 for design and construction.

“The concept is to welcome and direct people to downtown,” he said.

The arch was first mentioned in a wayfinding study in 2003, which identified a number of significant elements that directly contribute to the number of people visiting an area, their experience and what makes them want to return.

Among the four categories were gateways and entries – signs that introduce visitors to the city and set the theme with which they can identify throughout their visit.

“When people put investment and money into these arches, it makes people want to be there,” Farmhouse owner Charon said.

The City received a donation of $34,734 for the arch from the ABC group formed in 2015 by the Chamber of Commerce during Kingman’s competition for America’s Best Community.

Doug Adams, former plant manager for Nucor Steel in Kingman and a member of the ABC Group, was instrumental in reaching out to businesses for assistance in designing and manufacturing the arch.

The donation agreement stipulates a deadline of June 30, 2019, to complete the arch, at which time the money would be returned to the Chamber of Commerce.

“We don’t have the budget for any of these options,” Councilwoman Vickie Kress said at Tuesday’s meeting.

Cost was also the main concern of Councilman Travis Lingenfelter.

Kress, Vice Mayor Jen Miles and Councilman David Wayt all indicated a preference for Option 2, or the Beale Street location at Locomotive Park, which is close enough to Route 66.

Tourism Director Josh Noble said his only concern about location is the future Interstate 11 and how it will affect traffic patterns.

“It’s way down the line and it may not be a factor,” he said.

Council briefly discussed design aspects of the arch such as the Route 66 logo, which is included on one of YESCO’s concept designs. There was also talk about the railroad, mining and other historical elements.

“I’d like to see a tie in with the railroad, maybe a wagon wheel, to show where we’ve been and where we’re going,” Charon said.

Cere Tabbert, who was deeply involved with the ABC group and lives downtown, said her group studied several different plans and proposals for the arch, including those from the 2003 wayfinding study.

Tabbert said the sign that is being proposed is not what the ABC group had sought, and that it was supposed to cost $65,000.

There are two sign companies in the area that are interested in designing the arch, and Tabbert felt the project should be put out to bid again.

Not only is the new arch not what ABC envisioned, it’s not being supported with in-kind donations of material and labor, Noble said.

“Greg (Henry) and his engineering team have worked hard to make something the community wants. It always helps to give people something to see and do in Kingman,” he said.