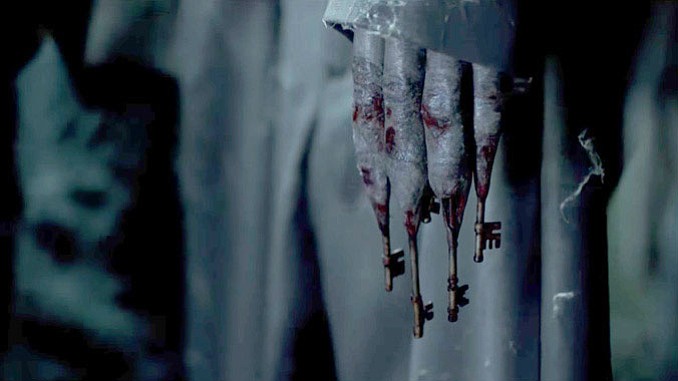 Insidious: The Last Key is a mixed bag. Somewhere after the events of “Insidious: Chapter 3” but before “Insidious,” we glimpse the tragic childhood of franchise heroine, Elise Rainier (Lin Shaye). Decades later, Elise will return to her childhood home to confront the literal ghosts of her past.

This chronicle of Elise’s childhood has great foundations: An abusive father who was a prison warden, a doting mother who supported her gifts and the tragic loss of her connection to her younger brother. Elise’s father hated her gift and locked her in a basement where she opened her first door to the Further. There she meets a demon with keys for fingers. The rest is self-explanatory because nothing good happens when demons are encountered.

Leap forward 50 years; Elise receives a call from Ted Garza. Ted explains that there’s something in his house and he needs Elise’s help. It just so happens that his house is Elise’s childhood house of horrors. Elise and her ghostbusters, Specs (Leigh Whannell) and Tucker (Angus Sampson), head to Garza’s rescue. During this homecoming, Elise meets two new family members who validate her gift and who will, hopefully, have roles in future films.

Fans of the Insidious Franchise, there are three great stories that are smashed together in this 103 minute run-time: Elise revisiting her childhood home to confront the key-fingered demon; Elise confronting the abuse from her father and Elise and the team saving a newfound family member. If only the sub-plots were intertwined more cohesively this would go from a good B-release to a compelling New Year primer.

In Garza, we find the standard trope: The confident soul who puts their entire life’s savings into a house with a malevolent past. Was there no other dilapidated home available for sale? Garza seems like a good guy, but Garza has a secret. If only that secret had been fleshed out with some sense of mystery or a teaser that leads us to an ah-hah moment, his presence would not feel so cheap and easily dismissed.

The story of Elise’s abuse is handled with superb intimacy and compassion. Lin Shaye delivers an exceptional performance with the opening line, “I call it a house ‘cause it wasn’t a home. I don’t have memories … I have scars.” Shaye’s performance gets exploited in such a way that the main actress carries all of the emotional turmoil and the sub-plot of a key-fingered demon goes without full explanation or intrigue. Writer, Leigh Whannell, who stars as Specs, clearly has a grasp of family unity, the beauty of matriarchal prowess and the comedy of ridiculously flirtatious men but it goes undeveloped in “Last Key.” There is a scene where the demon comes to Elise with two young women chained, crawling on their hands and knees. Perhaps the message is that misogyny, which keeps women chained to the past, is a demonic force. The rescue that comes to Elise and the young women is a moment of redemption and ultimate girl power.

Horror Fans, “Insidious: The Last Key” is a great B-movie. The sort of movie that – if it were on Netflix – it would be a bonus find on a Saturday night. At full-ticket price, it’s a let-down.

Insidious Fans: 2 out of 4 Miners

Horror Fans: 1 out of 4 Miners