US judge in Las Vegas may dismiss ranching standoff case 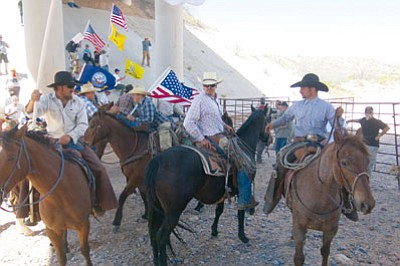 In this file photo, supporters of rancher Cliven Bundy gather under an I-15 bridge where the Bureau of Land Management had installed a temporary fence as a barrier.

LAS VEGAS (AP) – A U.S. judge who declared a mistrial last month could end the much-watched criminal prosecution of a Nevada rancher accused of leading an armed uprising against federal authorities.

Chief U.S. District Judge Gloria Navarro's decision on Monday is sure to echo among states' rights advocates in Western states where the federal government controls vast expanses that some people want to remain protected and others want open for grazing, mining and oil and gas drilling.

"To the Bundys, it's really more a political trial than a criminal trial," said Ian Bartrum, a University of Nevada, Las Vegas law professor.

"They're trying to get a particular message out about federal government overreach in the West, and Nevada in particular, and that states should have more local control," Bartrum said of 71-year-old family patriarch Cliven Bundy and his co-defendant sons, Ryan and Ammon Bundy.

"For the government, this is a criminal trial," Bartrum said. "They say, 'You can't have people show up with automatic weapons and defy federal officers.'"

Indeed, Steven Myhre, the first assistant U.S. attorney in Nevada, has cast the Bundys and co-defendant Montana militia leader Ryan Payne as leaders of a conspiracy that enlisted protesters and gunmen to "do whatever it takes" to stop federal Bureau of Land Management agents from seizing Bundy cattle in a decades-long grazing dispute.

The April 2014 standoff 80 miles northeast of Las Vegas pitted about three dozen heavily armed federal agents guarding corrals in a dry riverbed against hundreds of flag-waving men, women and children calling for the release of some 400 cows. The cattle had been rounded up from public land where Bundy let his herd graze for 20 years without paying government fees.

Several gunmen among the protesters had assault-style rifles and staked out commanding positions on a freeway overpass. Most of them were acquitted of criminal charges in two trials last year.

Ryan and Ammon Bundy also were acquitted of federal criminal charges in Oregon after leading an armed takeover in early 2016 of a national wildlife refuge to demand the government turn over public land to local control.

In the Nevada standoff, near Bunkerville, no shots were fired before outnumbered and outgunned U.S. Bureau of Land Management and National Park Service agents withdrew.

"They got what they wanted that day," Myhre said during Nov. 14 trial openings. "They got it at the end of a gun."

Trouble with the case was evident from the start, and Myhre lost a last-minute bid for a postponement. Proceedings were interrupted several times for closed-door hearings and sealed document filings before Navarro declared a mistrial Dec. 20.

The judge signaled she might dismiss the case outright and severely criticized prosecutors for "willful" violations of constitutional due process, including failing to turn over some evidence to defense teams.

"The government is saying there was no bad faith, just a regrettable oversight," Bartrum added. "But harmless is not for the prosecution to decide."

Cliven Bundy's lawyer, Bret Whipple, said Friday he was optimistic his client will be exonerated and freed.

"The court laid the foundation when she granted the mistrial," the attorney said.

Bundy is the only one of the four defendants still jailed after refusing the judge's offer of house arrest.

"He feels that to accept conditions for his release would be to acknowledge he did something wrong," Whipple said. "He wants to walk out a free man."

Gregg Cawley, a University of Wyoming professor who writes about land protests in the West, said a collapse of the case would be seen by many as a victory for states' rights.

"But it would not actually be a clean victory," Cawley said. "Conspiracy is very hard to prove. The Bundys got acquitted in Oregon. But if charges in Nevada are dropped, there's no resolution to the question.

"It could be seen as criminals going free on a technicality, rather than an actual vindication."