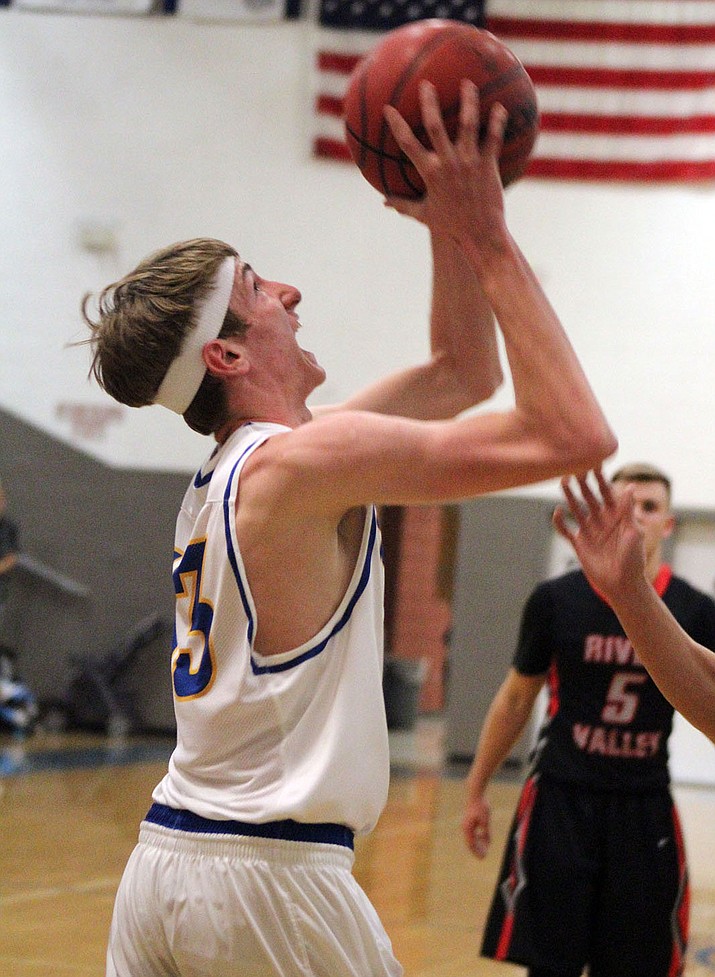 KINGMAN – The Kingman High School boys basketball team held a 13-point halftime lead Tuesday night, but it wasn’t safe as River Valley continued to put up a fight. The Dust Devils inched within five points on two occasions in the second half, before the Bulldogs used a late run to tally the 58-45 win.

“We finally got back to doing what I know we’re capable of doing and we pushed it back over that double-digit delta,” said Kingman head coach Nick Juby. “That’s what sealed it for us. It’s hard in high school basketball to come back from double digits in the fourth quarter.”

The Bulldogs appeared to be in control entering the second half with a 31-18 advantage. However, River Valley had other plans as it used an 8-0 run to cut the deficit to 31-26 with five minutes remaining in the third quarter.

Juby quickly put a stop to the Dust Devils’ offensive onslaught, as he called a timeout and Kingman responded with a 7-2 run to push its lead back to 38-28.

“You have to kill runs with timeouts,” Juby said. “I said, ‘guys we have to relax. Stop trying to play too fast.’ We were going for the kill shot right out of halftime.”

The Bulldogs still weren’t out of the woods though, as No. 35 ranked River Valley (2-10, 1-3 3A West Region) kept the game close early in the fourth quarter before Kingman used another run to take a 51-40 advantage and cruise to victory.

“That 6-2 run in the fourth quarter pushed the lead back out,” Juby said. “… We got back to the double-digit delta and that was huge.”

Tucker Humble led the way for the Bulldogs – scoring 10 of his game-high 17 points in the second half. Tobias Bagby added 16 points, while Quanah Quasula scored 11 and Elijah Howery had four points.

“I just try to do my thing,” Humble said. “Play defense, get steals and be part of the team. Just play my role.”

On a side note, the Bulldogs have surpassed their win total for each of the last two seasons.

“That was win No. 6 in power points, which is the most we’ve had in my time here,” Juby said. “We had five my first two years. To pass that milestone is a big one. They don’t realize that, but I always tell them, ‘state is our ultimate goal. But the next game is the most important.’”