Lee Williams High School students connect with the past 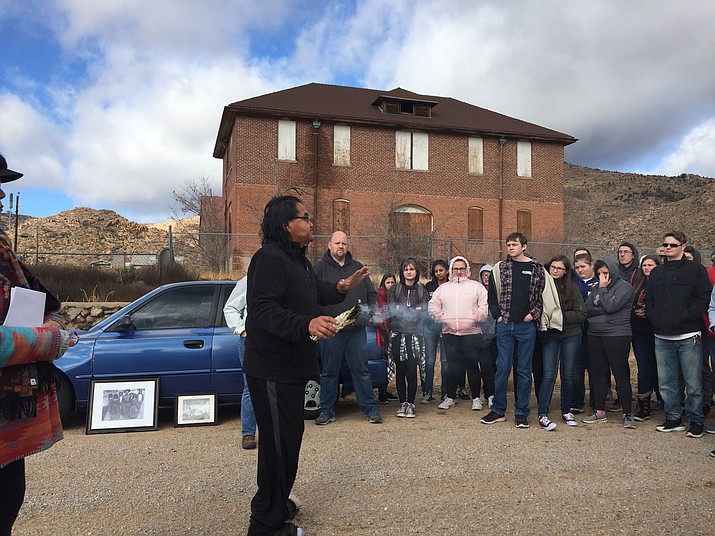 Under the instruction of Cheryl Massey and James Skomessa, 10th-graders in the International General Certification of Secondary Education (IGCSE) American History course in the Cambridge program began their study of the impact of westward expansion on Native Americans with a focus on the Truxton Canyon Training School, a boarding school created in 1901 with the purpose of assimilating Native Americans into the American culture.

Students will use the information to complete Cambridge coursework for the international examinations in May.

On Jan. 10, the Cambridge students traveled to Valentine to visti the Truxton school, which is now listed on the Historical National Registery, where they were met by Marcelene Craynon, a Haulapai Representative from the Haulapai Cultural Center. Craynon was accompanied by Hualapai Elder Drake Havatone, Carrie Cannon, an ethnobotanist, and Jim Williams, superintendent of the Bureau of Indian Affiars.

Each speaker provided an essential piece of history. Craynon described the significant role the school played in local and national history, and the “legacy” of Hualapai people.

Havatone welcomed the Lee Williams students in his native language in order to set the scene and tone for the visit. The Elder told stories about the lives of the tribal members who were affected by the boarding school system. Hualapai families were separated for up to 15 years, including members of Havatone’s own family.

“This is a place of hardship to our tribe,” Havatone said.

He blessed the site by burning sage, explaining to the students the cultural significance of the sage burning ceremony, to care for everyone and welcome the visitors with open arms.

Cannon explained that the school was funded by the federal government through The Approporations Act of 1892. However, because of a lack of necessary funding, the maintenance of the school became the responsibility of the students: growing gardens, washing clothes, and facilities and ground maintenance.

Williams shared insights about the BIA and the government’s involvement in the creation and administration of the school at the turn of the century and addressed how the BIA works now. Williams also described the school at the height of enrollment, a once vibrant campus lined with full-grown trees and scattered with bright brick buildings where the railway tracks run adjacent. He pointed out the locations of the now excavated buldings of the campus, including what was once the largest building, the dormitory.

The visit was sealed with a Hualapai circle dance to end the sharing of community and culture with celebration and reverence.

Students began their study in December by exploring Chloride and Camp Beale Springs ,and visiting the Mohave Museum of History and Arts (Interesting fact: the museum was built from the bricks of the boarding school’s dormitory).

Students were provided the opportunity to examine this time in history through several different lenses: American settlers and soldiers, the U.S. government, and the Native Americans, specifically the local Hualapai tribe.