Even without El Nino last year, Earth keeps on warming 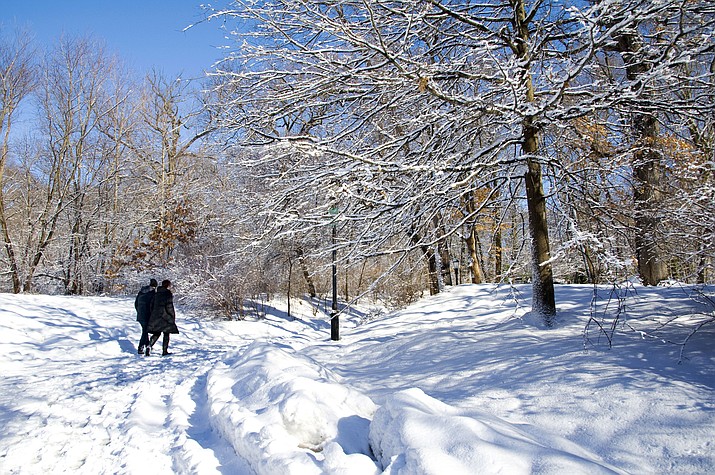 WASHINGTON (AP) – Earth last year wasn't quite as hot as 2016's record-shattering mark, but it ranked second or third, depending on who was counting.

Either way, scientists say it showed a clear signal of man-made global warming because it was the hottest year they've seen without an El Nino boosting temperatures naturally.

The National Oceanic and Atmospheric Administration and the United Kingdom's meteorological office on Thursday announced that 2017 was the third hottest year on record. At the same time, NASA and researchers from a nonprofit in Berkeley, California, called it the second.

The agencies slightly differ because of how much they count an overheating Arctic, where there are gaps in the data.

The global average temperature in 2017 was 58.51 degrees, which is 1.51 degrees above the 20th century average and just behind 2016 and 2015, NOAA said. Other agencies' figures were close but not quite the same.

Earlier, European forecasters called 2017 the second hottest year, while the Japanese Meteorological Agency called it the third hottest. Two other scientific groups that use satellite, not ground, measurements split on 2017 being second or third hottest. With four teams calling it the second hottest year and four teams calling it third, the United Nations' World Meteorological Organization termed 2017 a tie for second with 2015.

"This is human-caused climate change in action," said Nobel Prize winning chemist Mario Molina of the University of California San Diego, who wasn't part of any of the measuring teams. "Climate is not weather, (which) can go up and down from year to year. What counts is the longer-term change, which is clearly upwards."

NOAA's five hottest years have been from 2010 on.

During an El Nino year – when a warming of the central Pacific changes weather worldwide – the globe's annual temperature can spike, naturally, by a tenth or two of a degree, scientists said. There was a strong El Nino during 2015 and 2016.

But 2017 finished with a La Nina, the cousin of El Nino that lowers temperatures. Had there been no man-made warming, 2017 would have been average or slightly cooler than normal, said National Center for Atmospheric Research climate scientist Ben Sanderson.

On the other hand, NASA calculated if the temperature contributions of El Nino and El Nina were removed from the global data through the years, 2017 would go down as the hottest year on record, NASA chief climate scientist Gavin Schmidt said.

Carbon pollution is like putting the Earth on an escalator of rising temperatures, with natural variation such as El Nino or the cooling effect of volcanoes like hopping up or down a step or two on that escalator, scientists said. Not every year will be warmer than the last because of natural variations, but the trend over years will be rising temperatures, they said.

The observed warming has been predicted within a few tenths of a degree in computer simulations going back to the 1970s and 1980s, several scientists said.

It has been 33 years since the last month that the globe was cooler than normal, according to NOAA.

Northern Illinois University climate scientist Victor Gensini has never lived through a month or year that wasn't hotter than normal.

"I look at pictures of the great winters of the late '70s from my parents and wonder if I'll ever experience anything like that in my lifetime," said Gensini, who's 31.