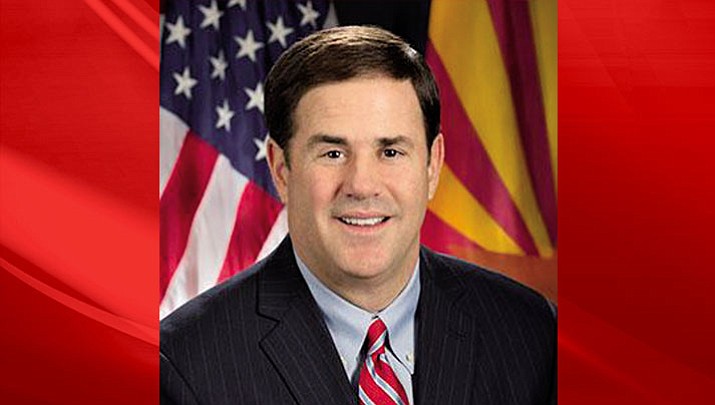 The governor gave an overview of HB2001, the Arizona Opioid Epidemic Act, emphasizing how important the issue is for rural counties such as Mohave, Yavapai and Pinal, each of which have seen more than 100 overdoses in the last six months.

“We believe this is one of the more thorough, thoughtful pieces of legislation in years,” Ducey said Wednesday in a conference call with reporters from rural newspapers.

The legislation has bipartisan support, he said. It passed the House on Tuesday and was being considered by the Senate on Wednesday.

The governor noted that 812 people died of opioid overdoses in Arizona from June through January, and there were 5,202 suspected opioid overdoses. Also, 75 percent of heroin addicts in treatment started with painkillers, according to the Journal of American Medical Association.

He called out doctors in Mohave County, with a population of about 200,000, for prescribing 6 million opioid-based pills in one year.

“This legislation combats the opioid epidemic from all angles,” Ducey said. “It holds bad actors accountable and gets more resources to our medical professionals, law enforcement and treatment providers.”

The Daily Miner reported on a patient in Dolan Springs who had trouble filling his prescription for chronic pain medication due to federal crackdown on opioid drugs.

Ducey said he wants to show “compassion” for those struggling with addiction and make sure people who are suffering from chronic pain have access to proper medication.

Jay Fleming of Dolan Springs has been taking morphine for his back pain for many years, but his doctor switched him to hydromorphone, sold under the brand name Dilaudid, because of FDA’s crackdown on opioid drugs.

“I have been a good patient for many years,” Fleming told the Daily Miner. “I have never abused my medications. It’s sad when patients abuse their medications. It’s tragic when a patient takes their life because of lack of pain relief.”

Christina Corieri, health policy advisor for the Governor’s Office, said medical patients already on prescriptions above the 90 MME (morphine medical equivalents) threshold for opioids will be “grandfathered” under the new law.

Corieri said the legislation would limit the first fill of an opioid prescription to five days of dosage, noting that opioid addiction doubles after six days on the medication and doubles again after 12 days.

In highlighting the actions of the bill, Ducey said it would improve access to treatment, expand the use of Naloxone to reverse opioid overdoses, hold manufacturers responsible, enact the “Good Samaritan” law for people to call 9-1-1 in case of an overdose without fearing criminal prosecution for their own drug use, and crack down on forged prescriptions.