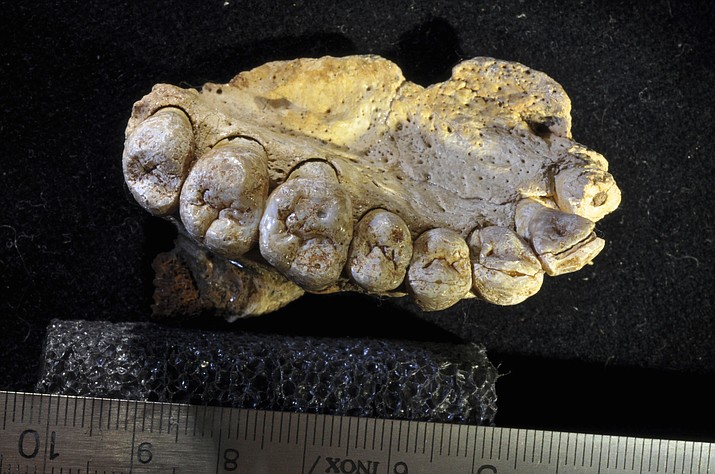 This undated photo provided by researcher Gerhard Weber shows a portion of the upper left jaw and teeth from the Misliya-1 fossil. Researchers found the jawbone in an Israeli cave, indicating that modern humans left Africa as much as 100,000 years earlier than previously thought. (Gerhard Weber/University of Vienna)

WASHINGTON (AP) — A fossil found in Israel indicates modern humans may have left Africa as much as 100,000 years earlier than previously thought.

Scientists say that an ancient upper jawbone and associated stone tools could also mean that Homo sapiens — modern humans — arose in Africa far earlier than fossils now show. And it may cause rethinking about how we evolved and interacted with now-extinct cousin species, such as Neanderthals.

"When they start moving out of Africa and what geographical route they choose to do it are the two most important questions in recent human evolution," said Tel Aviv University anthropologist Israel Hershkovitz, lead author of a study published in the journal Science .

The jawbone, complete with several well-preserved teeth, was found to be somewhere between 177,000 and 194,000 years old.

Previously, the oldest fossils of modern humans found outside of Africa were somewhere from 90,000 to 120,000 years old, also in Israel. So given the range in both those estimates, the jawbone might be about 50,000 to 100,000 years older.

The jaw was found in 2002 in the collapsed Misliya (miss-LEE-uh) cave on the western slope of Mount Carmel. Researchers spent the last decade-and-a-half looking for more remains and other fossils before publishing their study. They say the jaw belonged to a young adult of unknown gender.

The Science paper suggests modern humans could have left Africa 220,000 years ago, with some of the authors saying maybe it was even earlier. That's in part because the cave also contained about 60,000 flint tools, mostly blades and sharp points, some of which are 250,000 years old, said study co-author Mina Weinstein-Evron.

"Now we have to write another story," Weinstein-Evron said. "People were moving all the time."

Scientists believe our species dispersed from Africa more than once.

The tool supply in the cave and other evidence were so complete it basically showed "industry" by the early modern humans, she said. "This guy or woman would have been very busy," she said. "He didn't have enough time do this. He couldn't have made all of it. He must have had some friends."

One of the interesting things about the tools is that while they were used on animal hides for meat and skin use, they were more frequently used on vegetables, Weinstein-Evron said.

Eric Delson, a paleoanthropologist at Lehman College and the American Museum of Natural History who wasn't part of the study, said in an email, "Misliya may be one of several 'out of Africa' migrations" and even though it is the oldest modern human fossil, there may have been even earlier migrations.

He and others said the jawbone finding makes sense and is an exciting discovery.

Israel Hershkovitz, an anthropologist at the Tel Aviv University in Israel and the study's lead author, said the ages of the jaw and the tools suggest our species had left Africa 200,000 years ago or earlier. And that, he said, suggests we may have appeared in Africa as long as 500,000 years ago. The oldest known fossils of our species are about 300,000 years old.

Weinstein-Evron and Hershkovitz insist those tools could only have been made by Homo sapiens.

But Delson and two other experts unconnected to the study disagreed, saying the tools may have been made by Neanderthals or another of our evolutionary cousins.