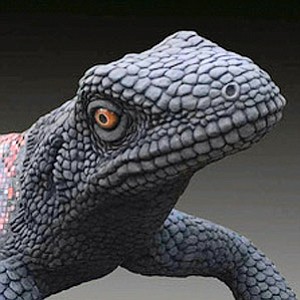 A seven-foot, 1,300-pound sculpture of the chuckwalla lizard is on its way to Kingman on Feb. 9 for the city’s Art in Public Places program.

KINGMAN – The chuckwalla lizard sculpture is near completion and scheduled for Feb. 9 delivery at the southwest corner of Fourth Street and Andy Devine Avenue, said Josh Noble, tourism director for the city.

The Italian mosaic glass sculpture is being fabricated by artist Solomon Bassoff of North San Juan, California, and is the first piece of work to be installed in Kingman’s Art in Public Places program.

Bassoff, owner of Faducci Studio, is known for his whimsical artwork on display across the country.

“As an artist, my goal and responsibility is to educate and inspire the community about local environment and wildlife,” Bassoff said in describing his work. “Often in our busy human lives we forget that we share a connection to the natural world and its creatures.”

With the chuckwalla lizard, he wants to stimulate conversation, create a connection and inspire reflection on what’s special about the area.

The pigmented sculpture will be 7 feet long, 4 feet wide and 3 feet high, embedded with Italian glass mosaic. It will weigh 1,300 pounds.

Noble said the artwork will be an “engaging addition” to the scene that’s evolving downtown.

“We’ve received a lot of support for the chuckwalla and I’ve heard some more colorful remarks,” he said. “I anticipate the sculpture will generate discussion, which is a large part of what artwork is about.”

Noble recalls seeing the occasional chuckwalla as a kid growing up in Kingman, and said he looks forward to celebrating its presence with this special work of art.

According to Arizona Game and Fish, the chuckwalla is the largest lizard in the United States, with males growing up to 16 inches in length. They’re docile, elusive creatures distinctive to the Kingman area that can live for 20 years or more.

“This large sculpture is intended for everyone to enjoy,” Bassoff added. “It was sculpted with the intention that children of all ages will want to touch it and play on it. Public art becomes a cultural icon and gathering place for a community.”

The City of Kingman commissioned the artwork by Bassoff at $10,000, a price tag that sparked controversy among citizens who are more concerned with local street maintenance and other needs.

The city received three proposals for the project, including two from local artists.

Bassoff said he’s spent more than 35,000 hours perfecting his craft of hand-sculpting concrete and mosaic glass. Some of his more famous works are the Komodo dragon at Woodland Park Zoo in Seattle and his 8-foot caterpillar at Davis Central Garden in Davis, California.