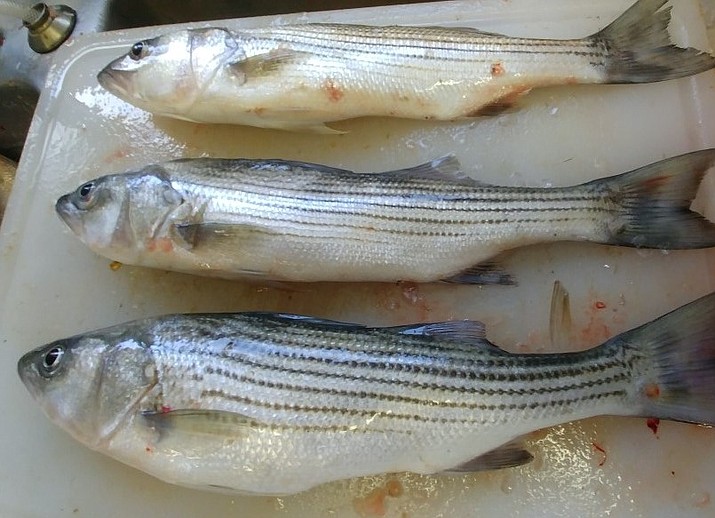 This photo shows the different body condition of stripers that are found in Lake Mead. All three of these stripers were females. Opinions vary on what is causing this condition. (Photo by Don Martin)

Summer is always a good time to catch striped bass on Lake Mead, but with angling success comes some news about the quality of the fishery this year, and it’s not all good.

A number of local anglers have told me that they are seeing a lot of “skinny” fish – stripers that are long but have little to no body mass. When hooked they don’t fight at all and literally die as soon as they hit the deck of the boat.

Some call them “snakes,” as they have big heads and very skinny bodies.

Whatever is causing this, these fish are showing up more and more in the catches that anglers are making out of Lake Mead, especially in the South Cove area. Some local anglers think it is due to a noticeable lack of fodder, especially threadfin shad.

Others think it has something to do with the declining water levels of Lake Mead, which is only at about 36 percent of capacity. That being said, when at full pool, the lake is the largest manmade lake in North America.

Personally I have seen the same thing in the catches we have made recently while on our night time fishing trips.

In early May, you might see one skinny fish about every 15-20 fish you caught. In June, the number is going much higher with as many as five fish per 20 being skinny. When I clean the fish we catch on our trips, I am always interested in what I find in the stomachs of the fish we catch. In over 50 percent of them, I find nothing in their stomachs.

About half will have either some of the chum I use, or there might be pieces of anchovies that we have been using for bait. I also like to “broadcast chum” the anchovy heads that I take off of the anchovies I cut up for bait. When the action slows down, I’ll toss them around the boat to stimulate the stripers into feeding. I found one striper recently that had seven anchovy heads in its stomach.

Every once in a while, I’ll find a crawfish in one, and very rarely I’ll find what appears to be a minnow of some kind, but they mostly look like threadfin shad.

My thought is with there being so many skinny females, it is possible that the stress of the spawn is causing these fish to look like they do.

Another case in point: This year at Stripe-R-Rama, the largest overnight striper fishing tournament that was held in early June out of South Cove on Lake Mead, not only were the weights of the top six teams down from previous years, but the largest striper out of over 1,000 fish that were brought in didn’t even weigh 3 pounds.

I decided to call the local fish biologist and ask for his opinion on what is happening at Lake Mead this year.

I spoke with Matt Chmiel, who is the fisheries program manager at Region 3. Chmiel had some thoughts on what he believes may be the cause of the skinny fish.

First of all, Matt said that this phenomenon is nothing new for Lake Mead. He noted that this happens almost every year. And he believes the issue may be related to the water temperature.

“Younger fish are more thermal tolerant,” he said. “It is an age class thing.”

Chmiel noted that the younger fish are generally in better health as they are able to forage in higher water temperatures, and the older age class fish are OK, as they can eat just about anything they find. It is just the fish that are in the middle-age class that are skinny, as they have trouble finding enough to eat.

Chmiel noted that threadfin shad populations in Lake Mead goes in cycles, and that may also contribute to the issue of fish finding enough forage.

Still, I wonder if the stress of the spawn is a big factor, given it is predominantly the females that are skinny. I believe that the stripers in the east end of Lake Mead spawn in April to early May. I base this on the fish we catch during those times. As it gets later into the summer, I still find empty egg sacks of the same size in the females that are both skinny and those that are still healthy. But Chmiel isn’t so sure about my hypothesis. He believes fish that are not healthy may not even spawn.

The bottom line is that no one knows exactly why this is happening.

So given that these fish are showing up in the bags of anglers, what should an angler do if he catches one? Chmiel says that an angler can just release the fish as soon as possible. My answer to that is when we bring them in, as soon as they get into the boat, they die quickly, even before you can get the hook out of them.

Chmiel noted that anglers cannot release dead fish back into the lake. Also, anglers who keep the skinny fish cannot waste the fish. It would be punishable as a violation of wanton waste. So anglers must try and get the flesh off of them.

The flesh of the skinny fish is very white and rubbery looking. While it is still edible, many anglers won’t eat them. The fillets off a healthy striper tend to be gray and firm. Personally, I prefer to eat the fillets off of the smaller stripers, the ones that are 10-12 inches long. Their meat is solid and when you remove the ribs, you have a great fillet for a fish taco.

Chmiel said that stripers are the No. 1 most harvested sport fish in Lake Mead. With no limits on fish less than 20 inches long and a very liberal limit of 20 fish over 20 inches long, anglers should keep every striper they catch. They are a great eating game fish.

If you catch a skinny fish, try and return it to the water as soon as possible. But if it is dead, get it on ice and try and recover some meat off of it. Don’t waste it.

Right now is a great time to go striper fishing. All you need is to get some anchovies, cut them into small pieces, keep dry ice on them to keep them frozen, get some either floating or submersible lights and go out at sunset.

I recently had four anglers come down from the Ford dealership in St. George, Utah, to experience the striper fishing near South Cove. They had purchased a trip I had donated to the Rocky Mountain Elk Foundation at a banquet in St. George.

In just 6 hours of angling, we put 210 stripers and six channel cats into the coolers. When we cleaned them, they ended up with almost 60 pounds of boneless fillets. We had about 15 of those skinny fish in our bag, but we filleted them all.

I expect the issue with skinny fish will only get worse as the summer goes on, but there are still plenty of healthy fish in Lake Mead.